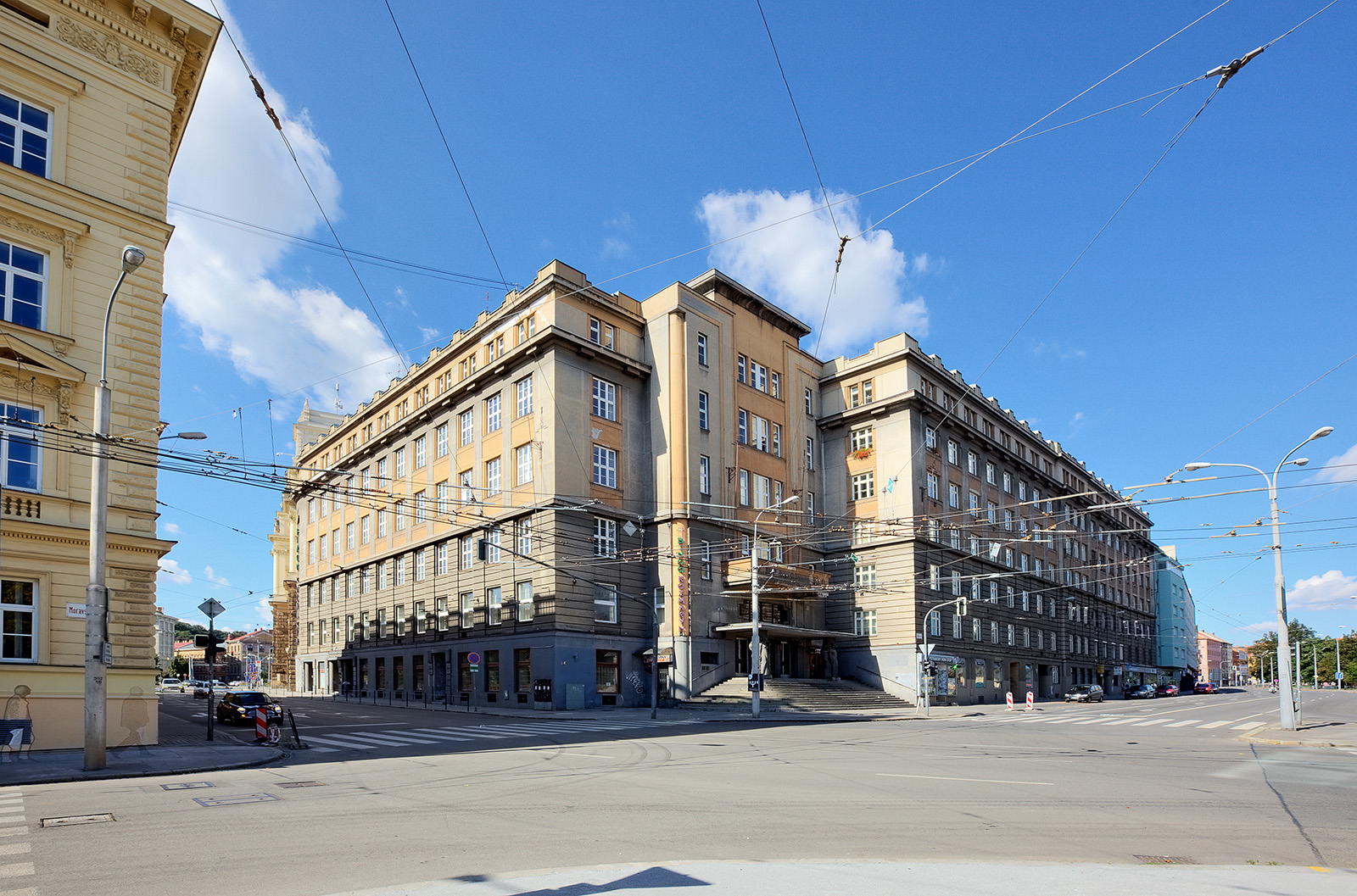 In 1923, the regional committee decided to open a competition for the completion of National House II by architect Ferdinand Hrach from 1917. The main reason was the fact that individual offices were scattered and a single site was desirable; other reasons included the housing crisis and high unemployment rates among construction workers. The assignment required that the volume of the neighbouring historicist building be respected and linked to the new building replacing the older inadequate development on the corner of Kounicova Street and Žerotínovo náměstí. The contract also required that two-thirds of floor area be occupied by residential units so that the conditions of the Building Act were met so the project would be eligible for the state subsidy. The plans also involved a café, restaurant and a large lounge housing the Moravian Mortgage Bank.
The jury did not award a first prize; Miroslav Kopřiva's design Jednota (Unity) ranked second and Bohuslav Fuchs', entitled National House III, ranked third. Since the regional committee raised a number of objections to Kopřiva's design, mainly concerning the operation of the building, it decided not to heed the professional jury's choice and instead assigned the project to chief builder František Utíkal. This step was met by strong opposition on the part of professionals as well as the general public, who strongly resisted the historicist tendencies of Utíkal's design. They criticised not only the obsolete architectural morphology, but also the suspicious practices that marred the architectural competition. The building authority partly yielded to the pressure of public opinion and decided at least to assign the design of the facade to architect Karel Náhůnek, who partially drew upon Kopřiva's original plan.
The main entrance to the building is situated on the retracted corner connecting the administrative wing to the earlier building by Hrach with a residential wing. A sixth floor was added to this residential part facing Kounicova Street, owing to the unsuitable original height of the ceilings (4 m). The facades sensitively respond to the historicist decorations of the earlier building, converting them into art deco geometric shapes, which is most apparent in the corner consisting of a raised risalit. The main entrance is sheltered by an overhang supported by sculptures of human figures by Václav Mach situated underneath the balcony and the vertical lines of staircase windows with broken lesenes. The interior of the entrance lobby was decorated with black, grey and green marble panels. In the end, the university library became the major user of the building. The raised ground floor housed a spacious French style café for 568 persons designed by Náhůnek; the basement housed a large-capacity marble hall and a cinema.