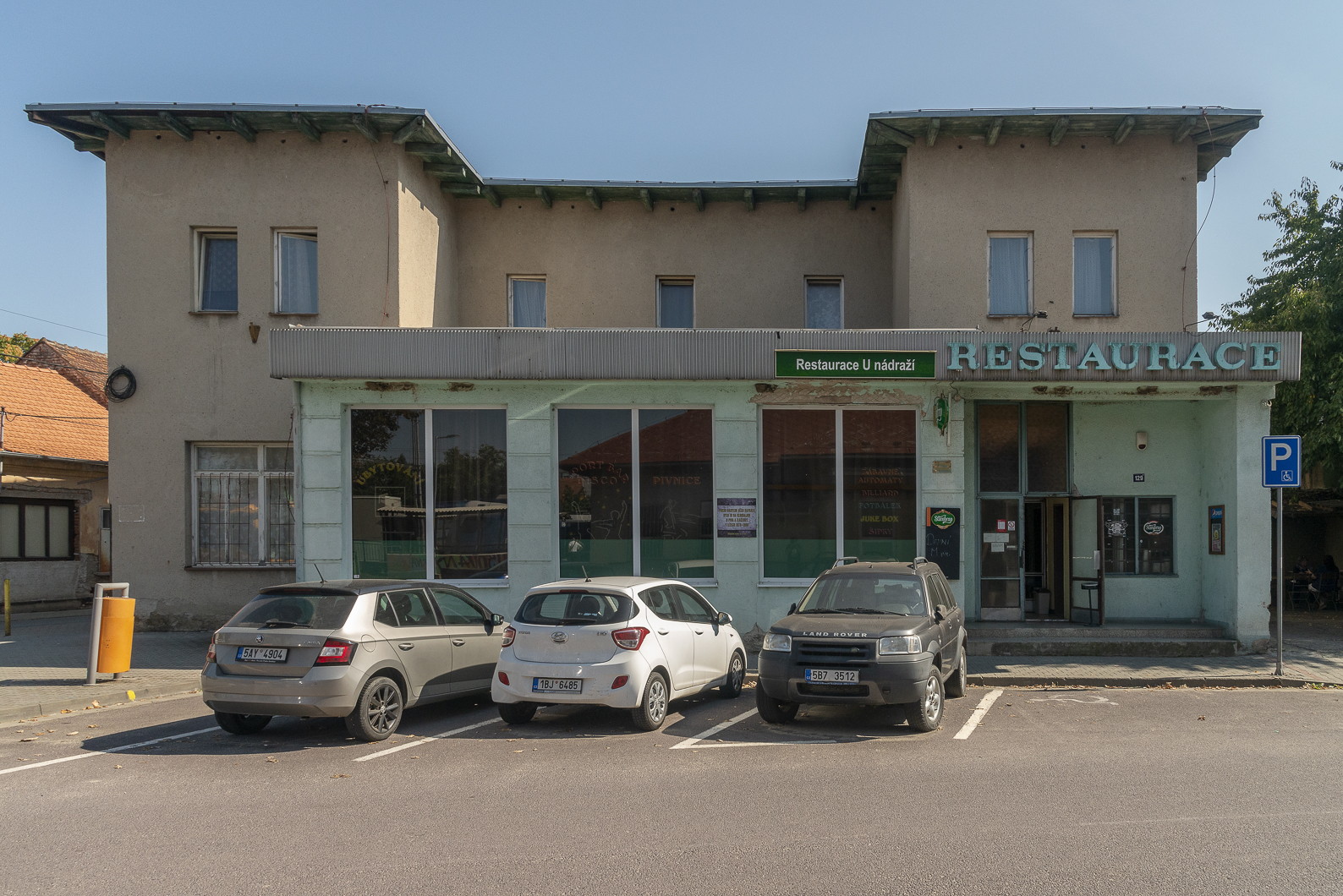 “The purpose of the company is […] to run all relevant ancillary shops, especially the restaurant and bartending trades in the inn belonging to the factory in Hrušovany.”
Statuten der Rohrbacher Zuckerraffinerie-Actien-Gesellschaft, Wien 1916, non-pag.

The building of the railway station restaurant with accommodation facilities was a part of the outer industrial area of the Hrušovany Sugar Refinery. Old postcards indicate that it was originally a semi-timbered building with elevated corners, located directly opposite the railway station building constructed in a similar style. From 1908, the restaurant was operated by the refinery and its premises served the catering and cultural activities of the refinery staff. It was the seat of the theatre association of sugar refinery clerks, and Red Cross courses and regular meetings of political parties were held there. In May 1915, the refinery obtained a building permit for lot No. 129 to build a new restaurant; work began after the completion of the director’s villa and before the fire that broke out in the factory complex in November of the same year. “On 6 January 1916, a residence permit was granted,” noted Augustin Weis, a local chronicler from Hrušovany.
Despite the present bleak condition of the railway station restaurant, which underwent a major renovation in the late 1970s, its original layout, characterized by several remarkable features, remains visible.
The frontage of this two-storey building with a smooth façade consists of two corner projections and a protruding space of the café on the ground floor between them; its roof was walkable and served as a terrace for the accommodation facility on the first floor. Architect Adolf Loos used a similar principle in many of his buildings, as well as the flat roof that around 1916 was still considered to be eccentric. The division of the windows’ upper parts into a series of rectangular cases seems to refer to the nearby director’s villa. The interior design of the restaurant testifies to the designer’s ingenuity. The high ceilings, divided by girders, rest on pillars that separate the restaurant section from the café that faces the station; a private lounge is located away from the main space. The operating section with the kitchen has a longitudinal layout and direct access to the guest rooms upstairs. The guests used a narrow staircase hall with a glass skylight, which – somewhat surprisingly – resembles the design of the staircase of Villa Müller in Prague.
The building is not mentioned in any of the lists of buildings related to architect Adolf Loos, and unfortunately the project documents that would confirm or refute his authorship have not been preserved. However, in an article published on the occasion of the architect’s 60th birthday, his long-time collaborator Karel Lhota (they met in Brno), mentions that “[Adolf Loos made] a restaurant and various apartments in a town in Moravia.” Despite a thorough study of the documents, only very little could be found about the history of the building; it may be related to the work of Adolf Loos only with regard to the formal characteristics of the building, its location, time of construction and the client.