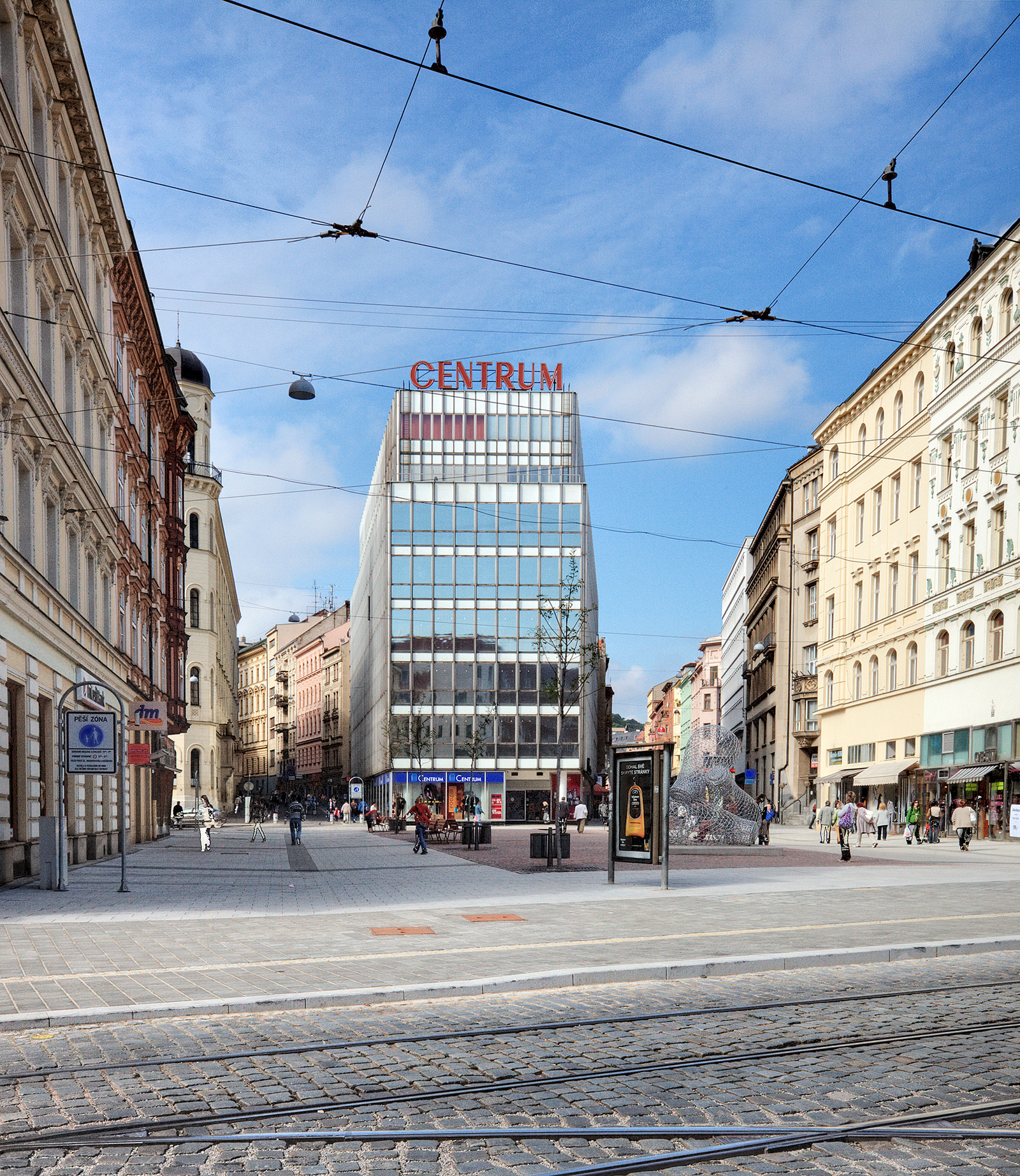 The Tomáš Baťa shoemaking firm achieved such prosperity that he decided to build a network of large department stores throughout the entire Czechoslovakia. The company purchased the plot between Jánská and Kobližná streets, right in the center of the city, where Europe's first skyscraper was to have replaced the historic low buildings. After the unsuccessful architectural competition and other delays, Tomáš Baťa  addressed architect Vladimír Karfík, who could profit from his experiences from the studio of American Frank Lloyd Wright, and design the final appearance of the building. The building consisted of the rectangular and horizontally segmented mass of the department store and the lean tower of the administrative facilities.
Highly publicized and anticipated, the construction of Europe's tallest building commenced in 1930. Bata's House of Services featuring twenty-three floors could never be erected without a great deal of attention to foundations in the rather unsuitable subsoil in this part of Brno; the beam structure was built on 245 ten-meter pilots. Nevertheless, there were problems with ground water and the building authority, which found deficiencies in the reinforcement of the supporting pillars. Construction was forced to stop at the eighth floor, with the resulting building amounting to a mere fragment of the planned skyscraper. The narrow front of this building on a trapezoid ground floor faces Malinovského náměstí and serves as a counterpoint to the distinctive masses of Morava Palace and Mahen Theatre. The building authority required that its layout be intersected by a passage forming a  connection between Kobližná and Jánská streets. The suspended facade was horizontally broken by bands of mirror windows and opaxite covered ledges with neon lights. The building featured two fast elevators, central heating and an electric exhaust system. The basement featured a  tire shop, shoe cleaning and repairs as well as pedicure with a cinema; the ground floor then housed a stocking repair shop and the first up to the fourth floors were occupied by shoe shops and pedicure studios. The fifth floor was occupied by a shoe repair shop, the sixth by a canteen and the seventh by offices.
In 1944 the facade was damaged by a bomb blast near the department store during an Allied air raid.  The present modified appearance of the facade is the result of the reconstruction of the building in 1966 involving the only available materials, so-called Boletice panels, which entirely disrupted the original horizontal segmentation of the facade. There have been several designs for the completion of the never-finished skyscraper since 1994. The most intriguing include the design by Eva Jiřičná from 2008, which attempted to draw upon the interwar esthetics and add eleven new stories with apartments and green terraces. However, the project was not approved by the Brno office of the National Heritage Institute.