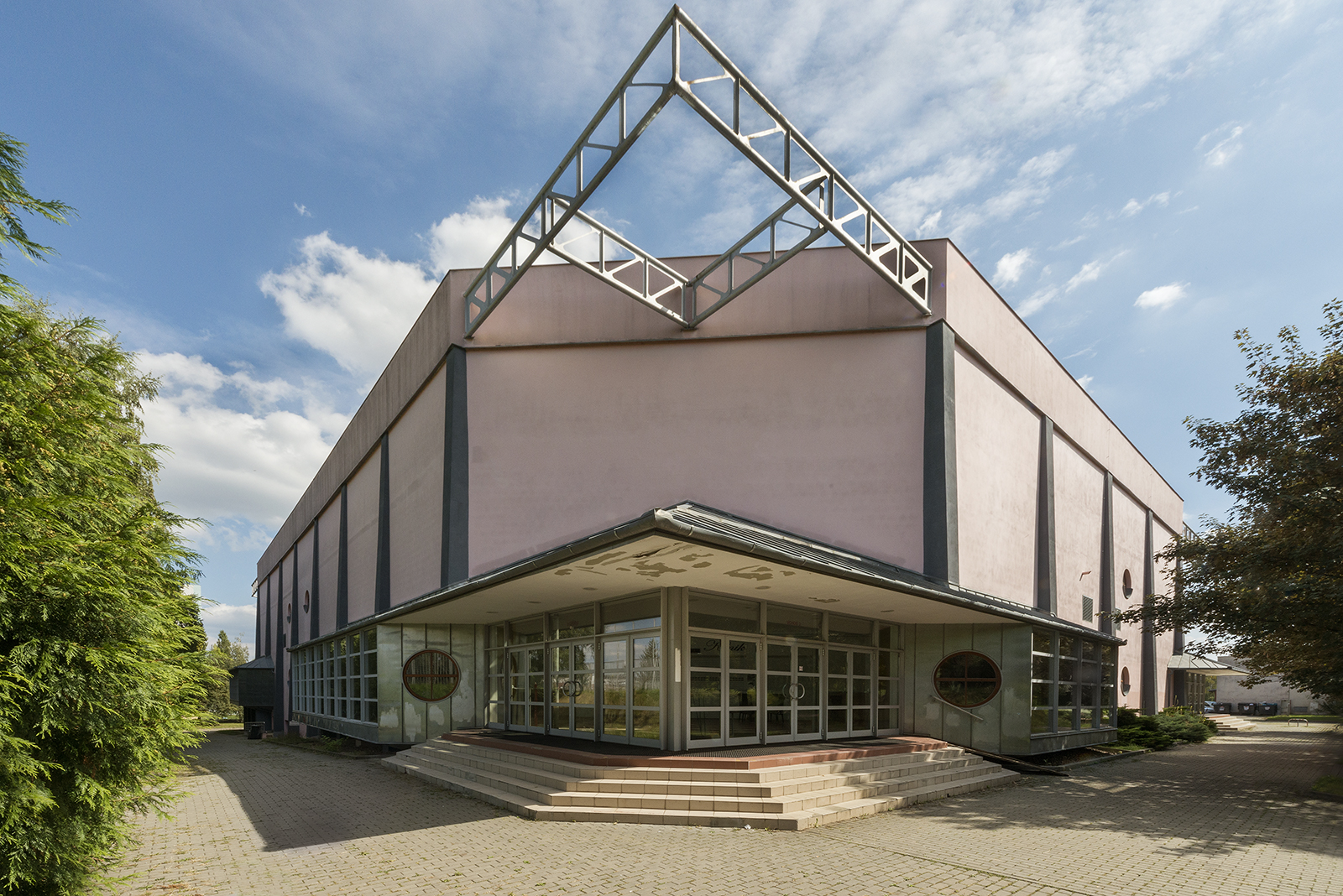 The origins of the sports hall in Královo Pole can be traced back to the long tradition of physical culture movements in the district. A branch of Sokol [a gymnastics organisation ] was founded in the town of Královo Pole as early as 1891, and from 1911 its members practised in the gym on the square Mojmírovo náměstí. The Sokol movement did not acquire its premises on Srbská street until 1920. These were extended in the period between 1935 and 1937 and are still used for their original purpose.

As with Sokol, the early part of the 20th century the saw the emergence of physical culture associations for workers. In 1919, these clubs joined the International Workers’ Gymnastic Union. The establishment of Královo Pole sports club, which was founded in 1911 under the name Sparta Královo Pole, is also worthy of mention. There, sportsmen displayed a growing interest in football, cycleball, cycling, handball, tennis, table tennis and ice hockey. The increasing interest in football led to the founding of the football club Viktoria Královo Pole in 1923.

During the occupation of the country in the Second World War, most of these clubs were disbanded, and certain members of the Sokol movement and the International Workers’ Gymnastic Union were even persecuted. Many sports venues were also severely damaged during the war. In 1945, the disbanded organizations were immediately reformed, but after the communist coup of February 1948 they were all merged into Sokol Gottwaldovy Engineering Works (the then name of Královopolská Engineering Works) as part of a reorganization.

For the purposes of sports education, a new athletics stadium with a training ground, a grandstand and an administrative building was built in Královo Pole in 1949. There was also a cottage and a kitchen for a summer camp in Bory. Even though the Sokol hall from the interwar period underwent general repairs in 1966, the capacity of this sports venue proved insufficient. Therefore, in 1969, construction work started on a new multi-purpose sports hall with volleyball courts on Vodova street. The football pitch at the older stadium was also reconstructed and a new club building was built there. Even so, due to the lack of basic facilities, the number of clubs fell from twenty-two to fifteen. Clubs focussed on the sports of boating, figure skating, cycling, rugby, table tennis and others left the Královo Pole Union of Sports Education.

The multi-purpose sports hall was built between 1969–1975 on the grounds of ​​the previously mentioned older stadium on Srbská street that was designed for track and field athletics and football. The hall was based on a design by the architect Mojmír Korvas and was further elaborated by the architect Jan Kruml, who later worked as construction manager of the site. The general contractor for the construction work was ČTO Brnosport. Some of the auxiliary work on the site was also carried out by part-time workers from the ranks of sportsmen, while each member of the sports union was required to contribute five hours of work. The hall was inaugurated on 14 March 1975 and was fully open to the public the day after.

The sports hall has an area of ​​20 × 40 metres and an auditorium capacity of 900 seats. The height of the ceiling is 8 metres, which is no longer considered optimal for some ball sports. The building is situated in the north-western part of the sports complex, in close proximity to a football stadium for 8,000 spectators, an outdoor volleyball court, an ice rink, a restaurant, a bowling alley and football training pitches. Next to the building, there was also a building for warming-up, which today adjoins the eastern facade of the neighbouring new hall.

There is a road leading up to the hall from Vodova street, from which the hall appears side on. Its facade is divided by steel bars that hold in place a mosaic wall, over which there is a series of small vertical windows. The semi-abstract ceramic mosaic whose theme is the Sun and its motion (measuring 3.65 metres high × 31 metres long) is from 1974 and is the work of Januš Kubíček and Josef Vohrabal. Together with Jan Kruml, the author of its architectural design, both are listed on the eastern wall. On the western façade, there is a centrally located entrance with distinctive roofing which is partly glass and decorated with steel network-like structures on the sides. The entrance vestibule adjoins an auditorium laid out around the playing area. Administrative spaces and facilities for athletes are situated in the eastern part of the hall, which can also be accessed through the adjacent warm-up room. From here there is also an entrance to the playing area and the viewing gallery on the first floor, from where it is possible to watch sporting events unfold. Around the strip wood playing area are situated the main stand, the honorary stand and two side stands. There is also a guest stand, a gallery, a control room and a radio room. For its time, the sports hall was equipped with a very advanced timing and computing apparatus. Its acoustic properties, which satisfy the standards for concert halls, are also important, thereby allowing it to also host cultural events.

The hall remained in the possession of TJ Královo Pole sports club up until 2000, when it was donated to the City of Brno, which invested in an extension for a new ball sports hall. This is known as the ‘large hall’ with an auditorium capacity of 2,900 seats, a 20 x 40-metre playing area and a ceiling height of 12.5 metres. It opened in 2001 and is close to the ‘old’ or ‘small’ hall. The entire complex was then officially named Municipal Hall Vodova. The old sports hall still serves its original purpose, and, although it has become the property of the City of Brno, it is still used by TJ Královo Pole, which also manages the Sokol hall in Královo Pole.