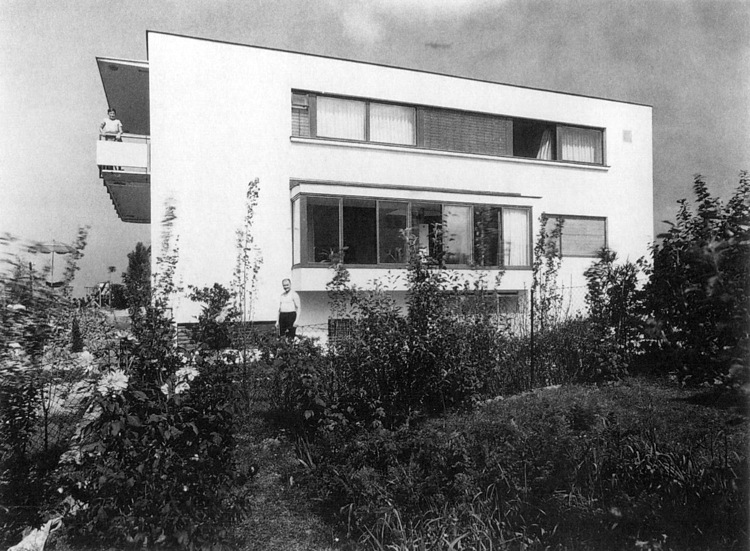 Josef Patočka, a leather trader, had this formal villa built by architect Jiří Kroha in 1936. This is a unique commission in the context of Kroha's work in the 1930s, as the architect was largely interested in the social housing issues, which he also investigated from a broad social and political perspective.
The villa is situated in the upper part of the Pod vodojemem villa colony, whose urban conception is the work of architect Jindřich Kumpošt. The main residential areas on the ground floor face south and overlook the sloping garden with a swimming pool. They consist of the single flowing space of the living room, dining room and lounge, separated only by means of different levels of floors and ceilings. In this way it combines both Le Corbusier's idea of a raised hall and Loos's cascade Raumplan. The rooms are lit from the side through a conservatory in the south-east facade. The first floor is intended for bedrooms, coatroom and a room for guests and is encircled by a terrace sheltered with a marquise.
The interior has preserved a number of technically and materially extraordinary features. These include e.g. the wooden paneling of the ceiling beams imitating a beam ceiling or opaxite lights which form part of the steel columns of the hall. The area of the living zone and dining room is separated by a low chrome heater with a glass cover. All of these ingenious details and the inventiveness of the disposition and facades are examples of Kroha's expressive conception of functionalism, which is also manifested in his own villa in nearby Sedlákova Street.