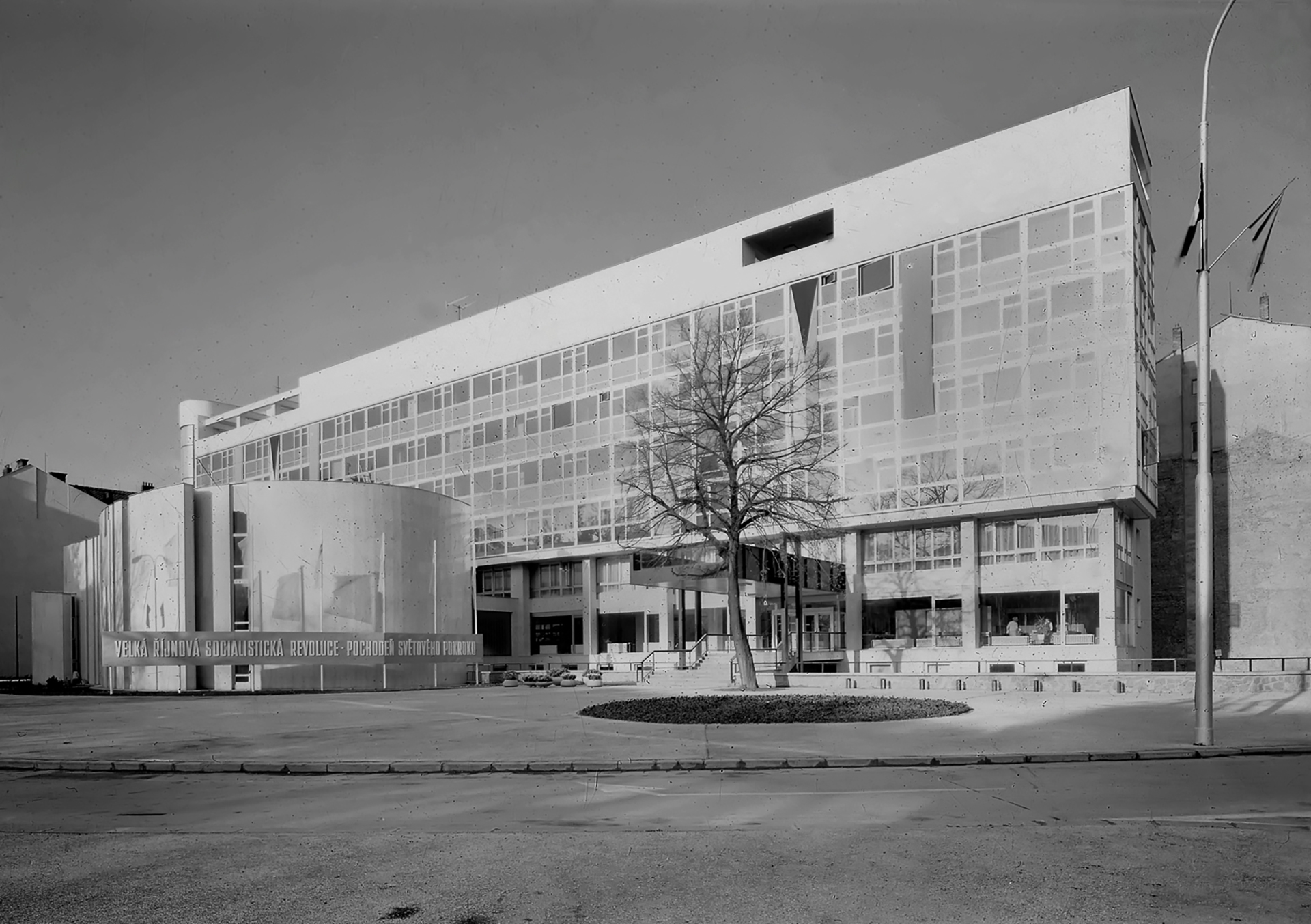 The administrative building of the Municipal Committee of the Communist Party, which is nowadays often referred to as ‘the white house’, is one of the most significant examples of modernist architecture in Brno and has been preserved in good, original condition. This eight-storey building on the north-western side of the square Žerotínovo náměstí was built in the years 1974–1976 according to a design by the architects Miroslav Spurný and František Jakubec. It was built to serve as the headquarters and offices of representatives of the Communist Party. Because of its socio-political function, the building is often viewed negatively in the public mind, in spite of the fact that it is an extraordinary example of 1970s architecture. Moreover, it was also a creative response to contemporary architectural trends happening abroad, particularly the post-war work of Le Corbusier and Oscar Niemeyer.

Miroslav Spurný, a student of the functionalist architects Bohuslav Fuchs and Bedřich Rozehnal, worked for many decades for Stavoprojekt Brno and specialized in the typology of hospital facilities. Together with Jakubec, he created an office building for the Communist Party in the form of a high-rise block with a suspended prefabricated facade, which complements the elevational axis of the neighbouring streets and, at the same time, forms a substantial counterbalance to the neighbouring historicist palaces from the beginning of the 20th century and the neo-Gothic church of John Amos Comenius. The seat of the local Communist Party was built on a plot vacated by a provisional Czech theatre building. The building had at one time been a pub that was known as U Marovský. The theatre had occupied it from the 1880s until the mid-1950s, when it was demolished because of its poor technical condition. At that time, after almost half a century of searching for an architectural design for a new theatre building, it was decided that the new Janáček Theatre would be built on Koliště street.

The light, almost fully glazed wall of the façade of the former communist committee offices extends across the administrative floors, its window panes of various shapes and sizes are set in subtle aluminium frames and its brown-hued glass impressively reflects the surroundings. The ground and first floors are slightly set back in comparison to the self-supporting glazed facade and accentuated by square pillars at regular intervals. A natural substructure for the building is created by green vegetation skirting the basement. The main entrance to the building is highlighted by a long, protruding steel awning that serves as a roof to cover the steps and as a balcony for the floor above. The architects Spurný and Jakubec cleverly combined the purity of line of the main office area and the open terrace on the roof, together with the three-dimensionality and sculptural qualities of other functional elements. The staircases were embedded in two monumental cylindrical towers which project out from the main building on its south-western and north-eastern edges. Light enters the towers through a continuous vertical strip of curved windows.

The lecture and conference hall for nearly 300 people is situated in a bent three-storey tube facing Žerotínovo náměstí. Along its entire length, the smooth stone cladding is interrupted by irregular rhythms of long narrow windows. Many high-quality materials were used in the construction of the Communist Party’s headquarters. The elevated entrance hall with its open balcony gallery and many of the corridors were lined with mahogany, large expanses of the exterior facades are covered with fine light ceramic tiles, and the interiors of the staircases are decorated with blue textured tiles and delicate glass balustrades.

After the revolution of 1989, the administrative building was used for a new purpose. It was transformed into a health centre and the former offices of Communist Party officials became the surgeries of paediatricians. In the post-communist years ‘the white house’ has also served as home to a vocational school for nurses and, more recently, a café, and has been a popular venue for cultural events. The statue of Klement Gottwald by František Navrátil, which was installed in the early 1980s in front of the main entrance of the building, was removed and replaced with the sculpture Mima [Mime] by Jiří Marek from 1986, commemorating the theatrical heritage of the site. Despite its undeniable architectural and historical value, the former building of the Municipal Committee of the Communist Party is not listed, as with most other post-war buildings in the country. This means it faces an uncertain future and could be demolished or completely and carelessly renovated relatively easily. This building, situated in an attractive location on the edge of the historical city centre, has been the subject of many years of debate. More recently, there have been serious discussions about the owner of the building, the City of Brno, exchanging it with Masaryk University to accommodate the needs of its Institute of Computer Science.