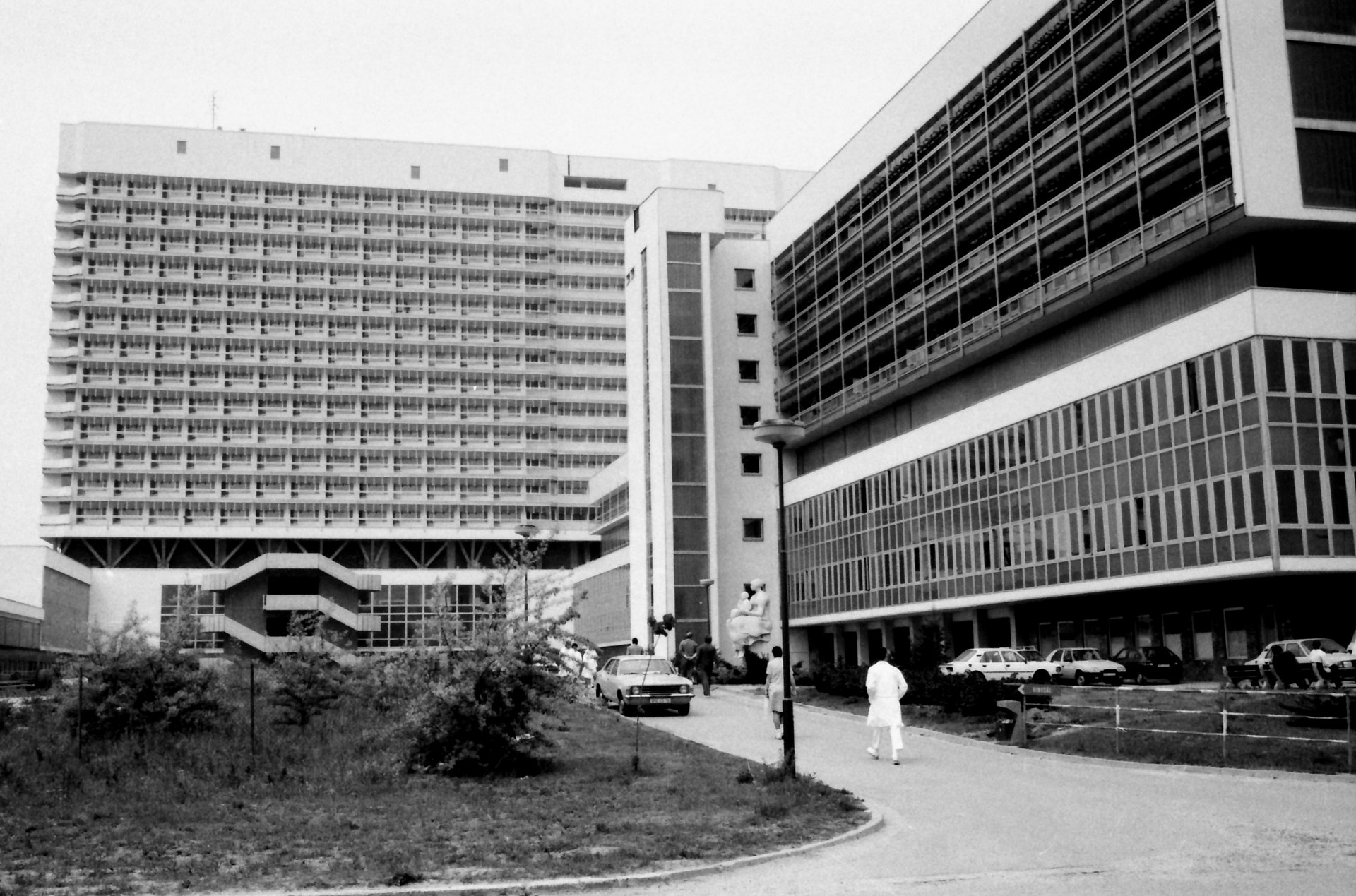 Since the interwar period, the idea of building a new hospital complex that would not only provide standard healthcare but also the environment to support a faculty of medicine and medical research had resonated strongly in Brno. After the Second World War, in 1940s and 1950s, the architect Bedřich Rozehnal worked intensively on designs for concentrated hospital complexes. His hospitals on Žlutý kopec and in Černá Pole (1953) had been extremely well received by users, medical experts and admirers of architecture alike. For the new complex, he identified a vacant undeveloped zone in the south-west of the city near the main road to Jihlava, in the locality of a hospital from the 1930s by Oskar Poříska. However, the modern hospital complex, which was to relieve the overburdened St. Anne’s University Hospital, did not appear on the site until decades later, and according to the design of another architect.

Miroslav Spurný had studied under Rozehnal at the Brno Faculty of Architecture and also worked with him briefly at his studio. He continued with Rozehnal’s pioneering activities in the field of collaboration between architects and doctors. After he had undertaken a number of trips to study hospitals abroad and had completed projects for the design of medical facilities in Znojmo, Boskovice and Valašské Meziříčí in the mid 1960s, he started work on the complex in Bohunice, as an architect of the Stavoprojekt design institute. Building work on the university hospital started in 1969, according to Spurný’s plan. However, construction took longer than expected, more than 20 years, mainly due to the exceptionally high costs involved.

The building of two dormitories for nurses and a gynaecology and obstetrics pavilion was followed by the high-rise building of the main pavilion. It had a capacity of over a thousand beds and housed specialized wards, administrative offices, laboratories and operating theatres, and finally opened in 1989. Spurný conceived it as a monumental eighteen-storey block, which, on its sides, organically fuses with the lower terrace-like set back administrative and technical wing and the gynaecology clinic. The dominant expressive elements of the wards of the in-patient wing are the regular strips of the geometric grid frontage with transparent parapets and brown-tinted sun-shades segmented by steel half-columns. The repetitive character of it combined with the enormous scale of the building reinforces the monumental appearance of the hospital. By rippling the central parts, and bending the balconies in the corners and the long lines of the balconies on the side facades, the architect added three-dimensionality, which is further emphasized by the diagonal rotation of some of the window openings. Spurný set the main entrance in the central passage on the ground floor. A pair of sculpturally shaped staircases project out from the bulk of the building. The one on the western side is clad in black tiles, while the concrete of the more expressive and undulating staircase on the eastern side has been left bare. The hospital was constructed using a special lift slab technology, where roof slabs are cast on the ground and are lifted up by means of a hydraulic system.

Because of long delays, Spurný’s project was not completed to its full extent, and the revolution of 1989 interrupted the construction. In 1992, the central area for in-patient wards was connected to the gynaecology clinic by the means of pavilion CH, which was for common examination and therapeutic units, but that is where the building stopped. The cascading design of the internal clinic and the polyclinic on the western side that was in the original plan were never built. In its place is the Diagnostic and Therapeutic Centre, which was built in 2006 according to a design by the Brno studio Atelier AS. University Hospital Bohunice continues to serve its original purpose as Brno’s main centre for medical care and research and its architectural design has been preserved virtually intact.