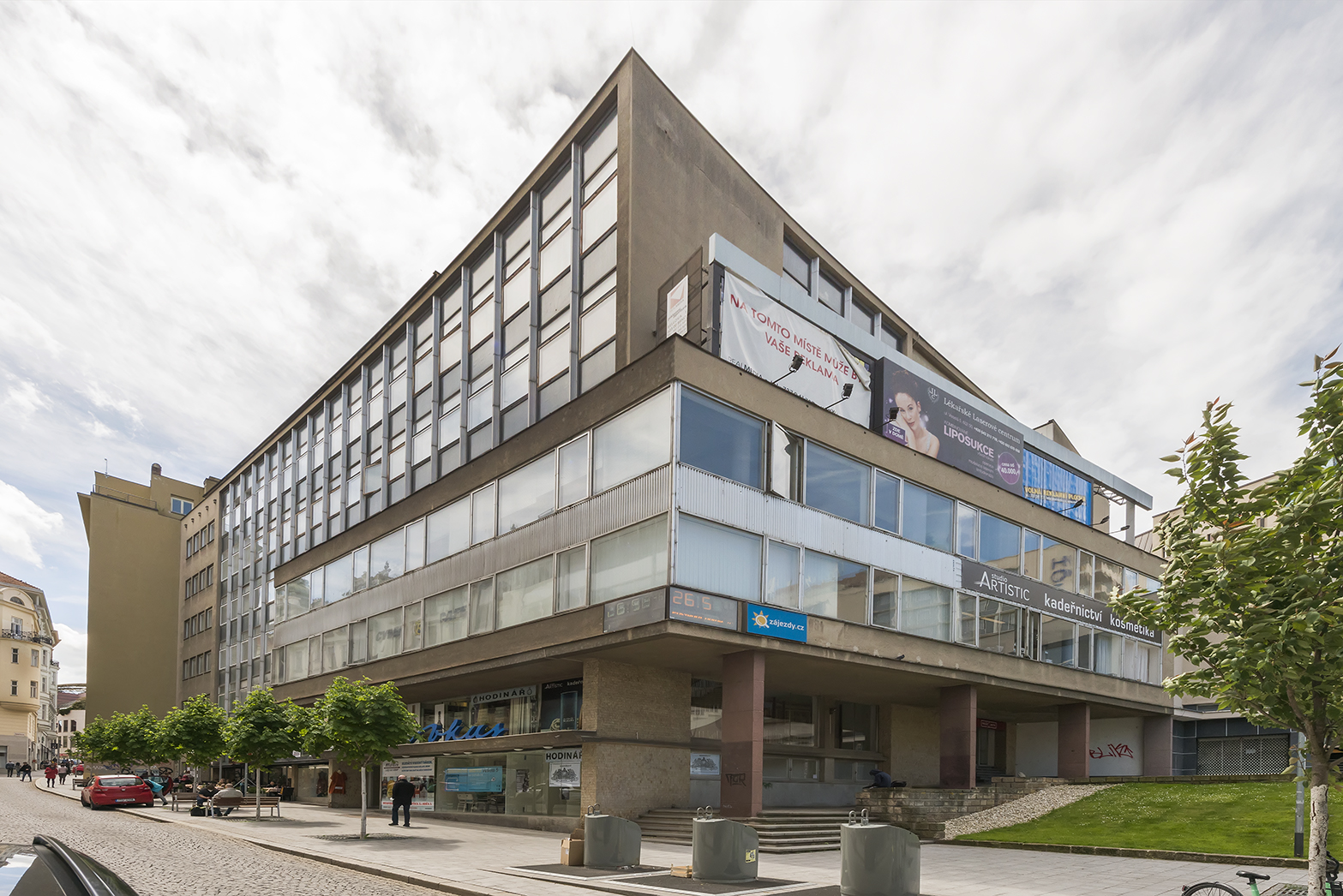 More photos (6)
Following trends in the West, the Hotel International was required to offer its guests services of a high standard, which included clothing alterations and the chance to buy new clothes. Thanks to money saved on the construction of the hotel, and the organizational abilities of some local architects, a Stavoprojekt Brno competition for a Vkus store was announced in 1962. The requirement was for a showroom and clothing store for the People’s Clothing Cooperative. It was to be built on the site where some 19th century apartment buildings had once stood. This was part of a larger urban study for a new city structure along with a planned hall of residence for apprentices and a House of Tourism.
The winning design by Arnošt Krejza and Karel Žák connected the building to the Hotel International by means of large outdoor terraces and situated the front facade with shop window and main entrance on Veselá street. The concept was to divide the building into three parts. There were sales and exhibition spaces on a raised ground floor, from which a striking marble staircase led to a first floor with other organizational spaces in the interior. They were connected to the hotel by a long corridor that also led to the adjoining building of the former YWKY, now known as Jalta Palace. The architects reserved the top floor for sewing workshops, storerooms, and sanitary facilities for the cooperative’s employees. In terms of style, the building combines First Republic architectural design with the emerging dynamic modernism of the 1960s. Although the interior of the store is open to ​​Veselá street through the large windows on all three above-ground floors, the overall impression for the passerby is diminished due to the proximity of the opposite building. This situating of the building closer to the street was apparently influenced by street line of the former residential buildings, but the architects did not sufficiently allow for the need to promote the Vkus showroom, whose effect is attenuated in this narrow part of Veselá street.
According to surviving studies in the Stavoprojekt archive, there was a plan to build the previously mentioned hall of residence in the same area, but as with the House of Tourism, the plan never materialized. In the end, the store was popular with customers primarily, due to the open interior space, which, because of its reinforced cast-in-situ concrete structure, could offer the light needed for displaying clothing. Moreover, the architects František Sláma and Olga Drápalová used polished metal, glass, and special lighting to create highly attractive interiors and it was one of the most luxurious shops in Brno, which contrasted sharply with the run-down businesses around it. The iconic blue-white neon Vkus sign above the main entrance is a significant feature of the exterior of the building to this day. The building has retained its original architectural and artistic expression in spite of minor modifications.
RK