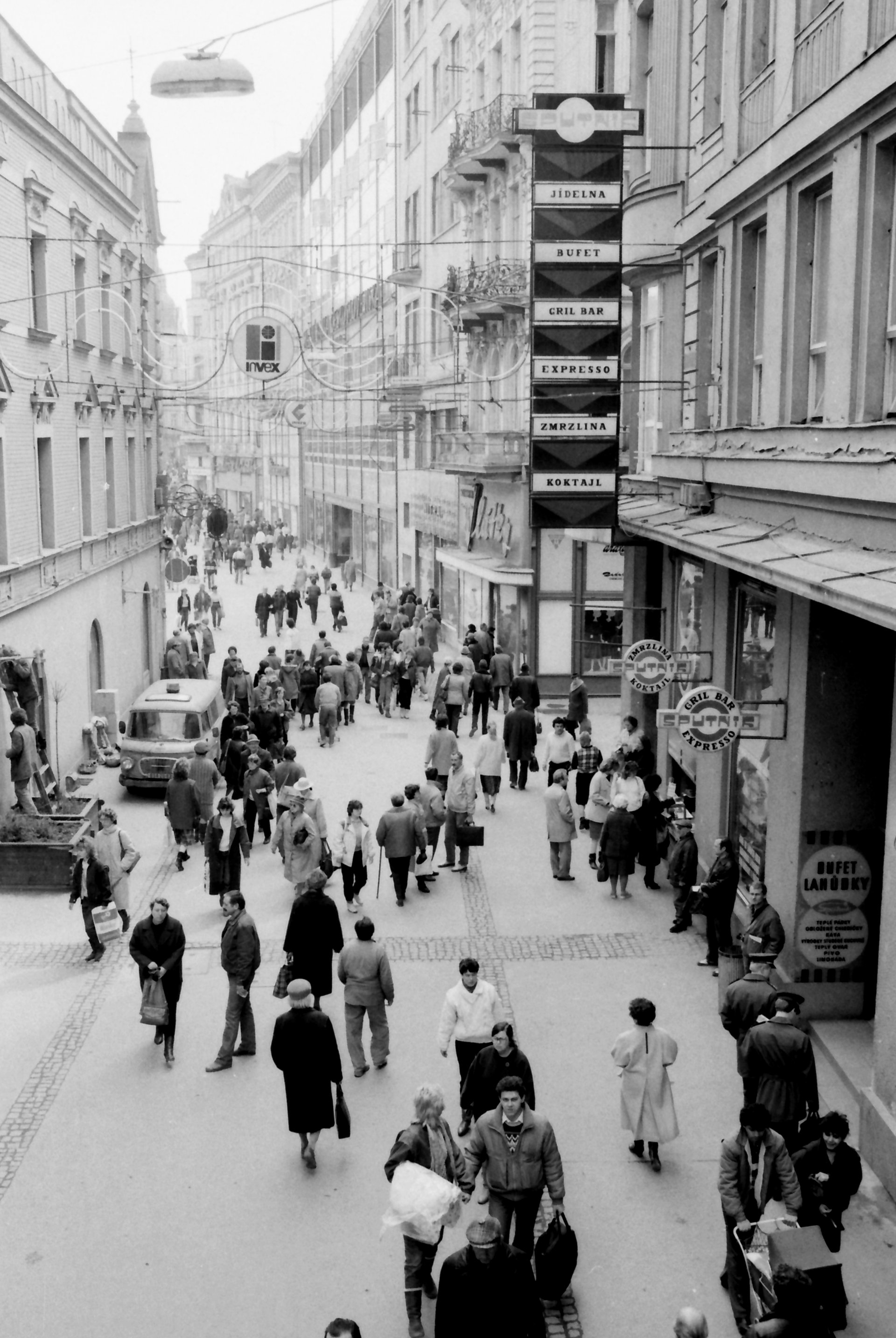 From the late 1950s onwards, Sputnik milk bar was among the most significant establishments serving snacks and refreshments in Brno. It was located in a Neo-Baroque palace at the junction of the streets Česká, Středová and Veselá. The interiors of the milk bar drew inspiration from the aesthetics of ‘the Brussels style’. The Sputnik building was designed by the architect Artur Weiss in 1914 as the main office of the First General Austrian Insurance Company. In the interwar period, it was transformed into a cinema according to a design by Bohumír Čermák. From 1935, it served as a department store with cafeteria for the Olomouc company ASO (Andr and Son Olomouc), which, in the 1930s, was building a network of shopping centres throughout the country. After the war, with the change in political regime, the majority of such companies were nationalized and catering establishments were managed by a state organization called Restaurace a jídelny [Restaurants and Canteens]. This body was also responsible for Sputnik milk bar, which opened in September 1959, and whose name and logo commemorated the first Soviet space satellite launched into orbit two years earlier.

The interior of the cafeteria was designed by the sculptor and artist Jaroslav Brychta, who had long been working as teacher and head of the School of Applied Arts for Glass-making in Železný Brod. This designer, who won awards for his glass figurines of animals at the 1958 EXPO exhibition in Brussels, had also worked on architectural projects such as the construction of his own wooden house in Železný Brod (1934) and the interiors of the milk bar on Nádražní, by the Brno’s main railway station, in collaboration with the architect Zdeněk Řihák (1958). The main entrance was situated on the rounded corner of the building and led to the ground floor cafeteria, while the upper floor was reserved for a higher category restaurant with a large seating area for customers. As with the milk bar by the railway station, Sputnik combined suspended ceilings in organic shapes, borders of neon lights, steel tubing for counters and tables along with stone, ceramic and melamine surfaces, and laminate seating furniture.

The milk bar was closed in the 1990s and its interior was not preserved. A shop now occupies the space where it once stood.