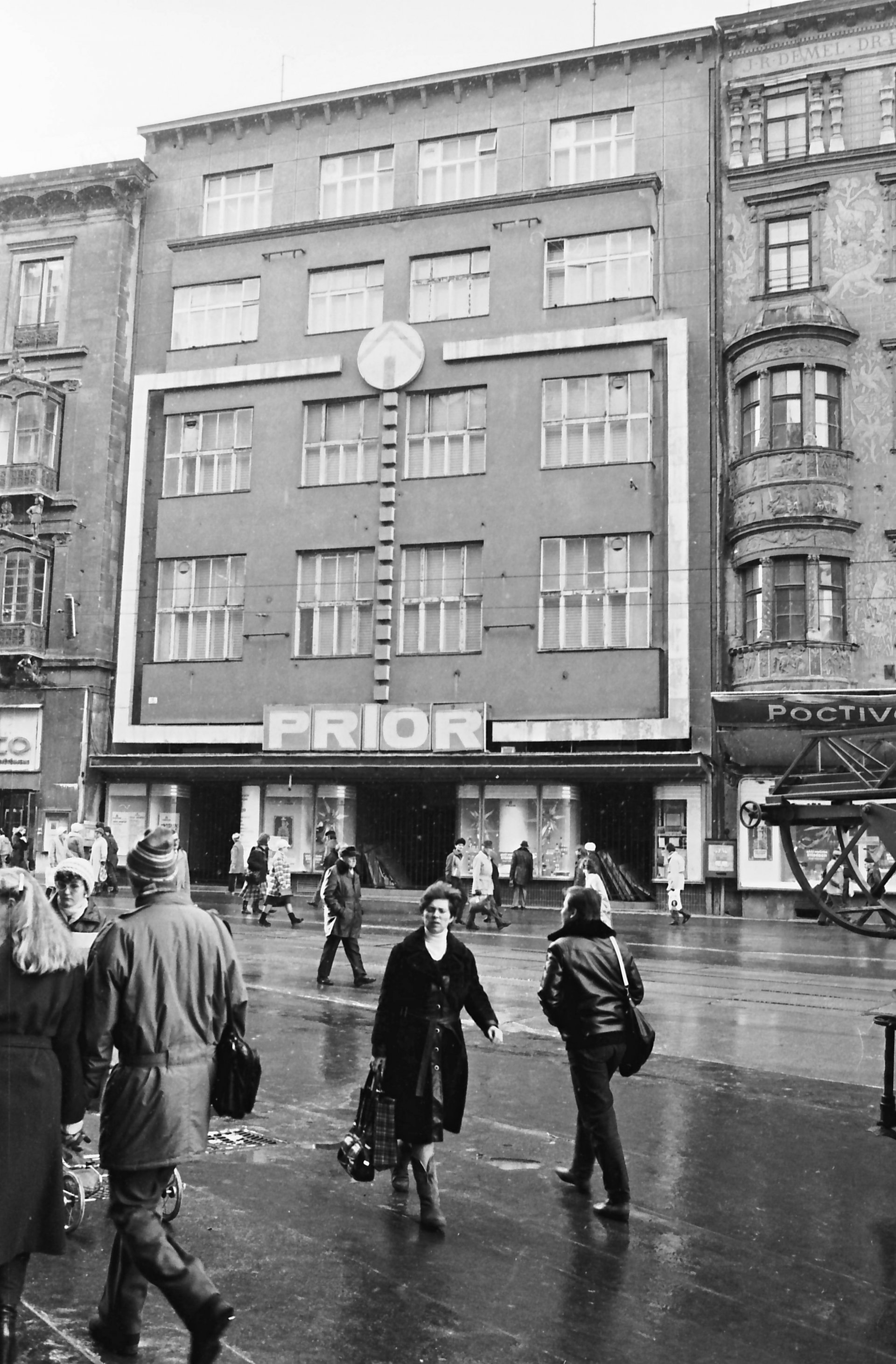 On the south-western side of the square náměstí Svobody, between the Renaissance House of the Lords of Lipá and the Neo-Renaissance Klein’s Palace, both important historical buildings, there was once a Baroque burgher house that had been used down the years for residential, retail and banking purposes. During the Second World War, it was badly damaged in the bombing of Brno and had to be demolished. The vacant site in a prestigious location in the very heart of the city centre was soon occupied by a five-storey office building, modified in 1950 for the purposes of a department store for the state enterprise Rozkvět, which later became part of the nationwide network of PRIOR stores. In accordance with efforts to renew the quality of services that had been decimated by the war, Rozkvět was meant to expand the opportunities for shopping and refreshment in the centre of Brno, as was the case with the nearby market hall on Zelný trh and the Milk Bar, a few houses down on the square

Unlike the former burgher house, which was a floor lower than its neighbouring buildings, the Rozkvět building, which opened in 1951, was the same height, thereby balancing the frontage of the square. On the other hand, its smooth facade, punctuated only by four large windows on each of its floors, stood in contrast to the decorative facades of Klein’s Palace and the House of the Lords of Lipá. The main entrance was located in the middle of a light glazed ground-floor below a neon sign advertising the name of the department store. The most striking decorative element of the otherwise modest building was a huge luminous letter R extending the height of one floor, together with a continuous neon tube that circled the entire facade. Particularly in the evening, Rozkvět took on an illuminated metropolitan appearance that was reminiscent of the city’s interwar tradition, when it boasted many excellent functionalist department stores in the centre.

Rozkvět was completely reconstructed in the years 2004–2005 according to a project by a team of architects consisting of Ivo Balusek, David Písařík, Radka Weberová, Radomír Staněk and Lukáš Bílek. The new facade is now glazed and is completely covered on the upper floors by reflective blinds. The original shape of the business space on the ground floor has disappeared along with the elegant neon signs. The building is still a shopping centre, but also offers offices and residential units, while serving as a passageway that connects the main square with the adjoining street of Panská.