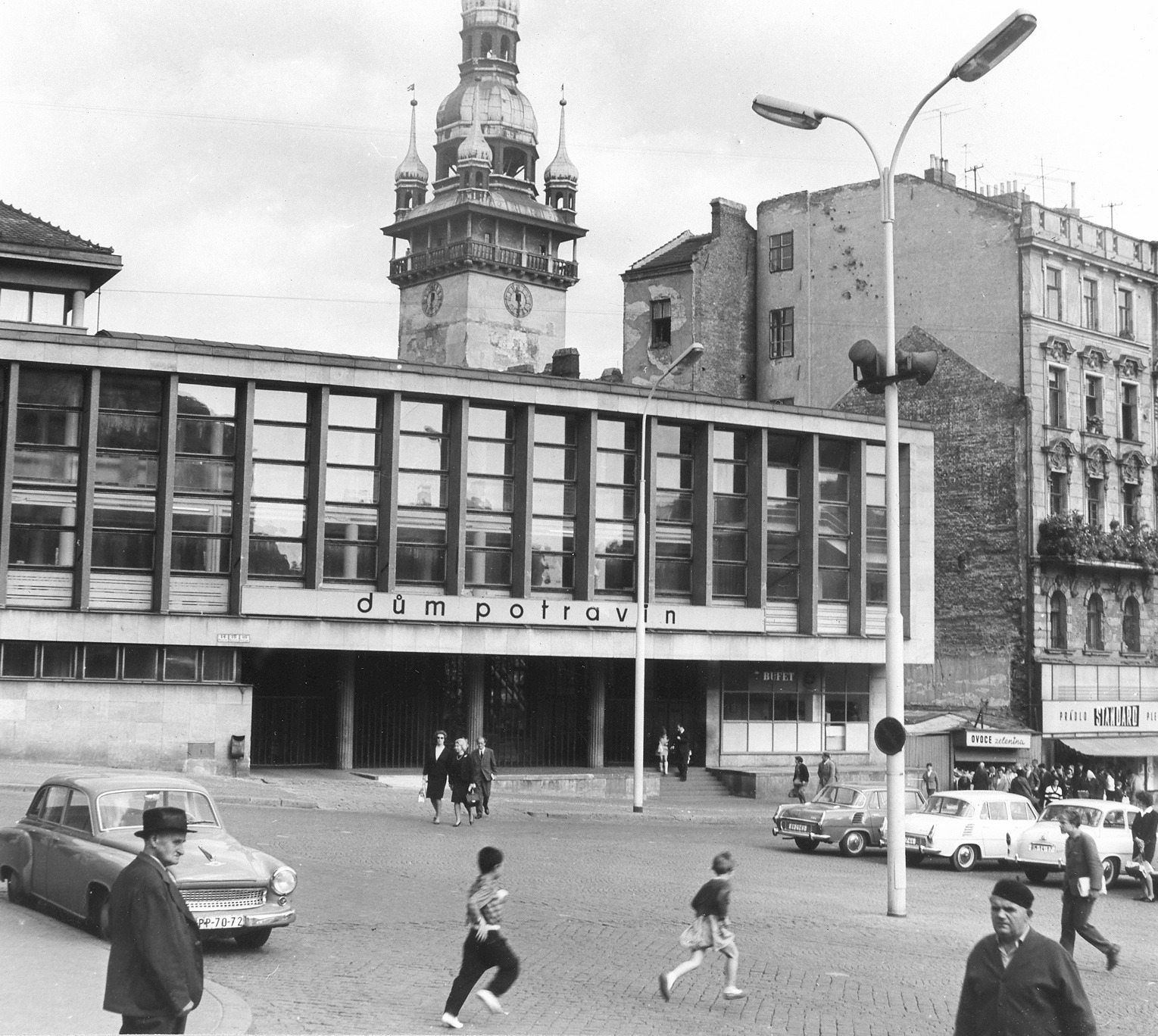 The building of the municipal market hall, which was designed as a retail area for foodstuffs, was built on the north side of the square Zelný trh, a marketplace for fruit and vegetables down the centuries. The large gap created by the gradual collapse and subsequent demolition of three residential buildings in the early 1940s served as the site for a year-round market hall which would accommodate stall holders from the square and symbolically signal a return to the quality services of the 1920s and 1930s that had been violently interrupted by the war. The market hall was built in the years 1947–1950 according to a design by the architects Emanuel Hruška and Vilém Zavřel, who were intimately familiar with the morphology of  International Style. The building was inaugurated in 1951, a time of harsh Stalinist rule, perpetual food shortages and officially propagated socialist realism. Nevertheless, the architectural expression of the market hall was still rooted in Brno’s strong interwar functionalist traditions and it became one the most important post-war examples of its kind, alongside Rozehnal’s Children’s Hospital and the Czechoslovak State Railways Directorate by Evžen Škarda

The four-storey building combines two main parts: a projecting glazed open-plan hall on the first floor, connected to a simple, higher, cubical wing opening onto the streets Starobrněnská and Mečová. The frequent repetition of huge ribs separating the windows running along the floors into vertical strips and the curvature of the suspended facade of the hall create the highly dynamic character of the main frontage. It was envisaged that Vincenc Makovský, Sylva Lacinová-Jílková, Ladislav Martinek and Karel Zouhar would create sculptural decoration for the façade, but this idea never materialized. The monumentality of the building was also enhanced by its sandstone cladding. For the structure of the market hall, the architects Hruška and Zavřel opted for a reinforced concrete skeleton, which, among other things, made it possible to leave the retail areas as open, unified spaces, brightly illuminated by light entering through the suspended glass wall of the façade. At the same time, from inside, this offered panoramic views of the historical square and the Parnas Fountain, particularly from the gallery of the second floor with its light glass railing, from where it was also possible to view the market down through its floors.

In a clumsy 1990s reconstruction, the building was converted from a traditional market hall into an ordinary department store (with the addition of escalators and steel columns on the facade). It was closed to the public and fell further into disrepair, partially empty and partly used as storage space for market stall holders. The building once again returned its original function as a covered marketplace in 2017. Led by the architect Michal Palaščák, the reconstruction cleared the building of its poor quality additions and re-opened the sheltered walkway on the ground floor, thereby connecting Zelný trh with the streets Starobrněnská and Radniční.