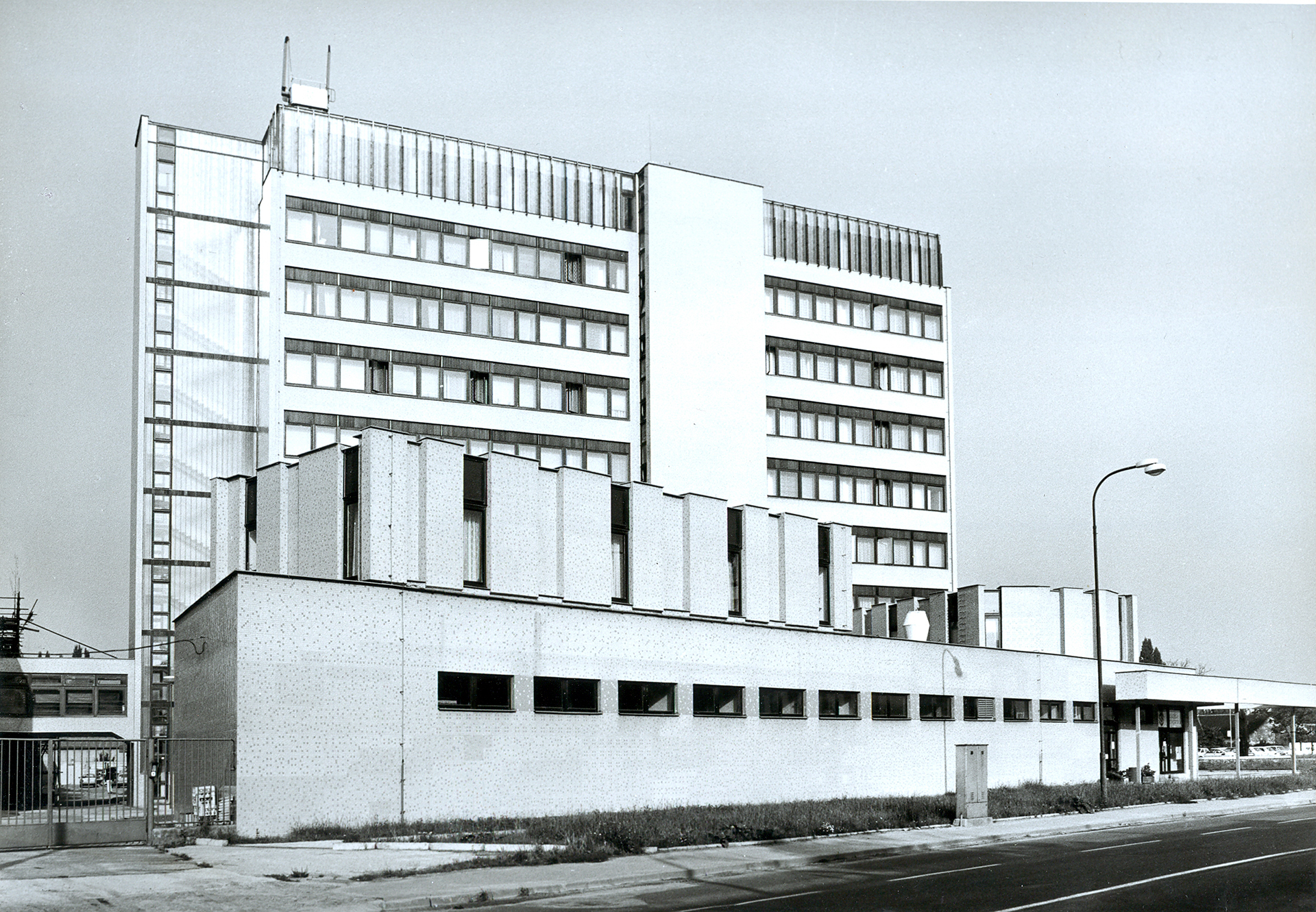 More photos (10)
A visually prominent feature of Komárov, which was a largely undeveloped district on the southern periphery of the city, is undoubtedly the nine-storey former operations building of the complex of the Research Institute for Antifriction Bearings. The architectural design for the Institute was created in parallel with a complex of research institutes on Botanická street. In both cases, their architect, Jan Dvořák, worked with a distinctive emphasis on the massing. In the dense urban development on Botanická street, the dominant element of the complex was the lower centrally situated entrance building, which was surrounded by higher administrative wings. By contrast, in the case of the Komárov institute it was the central ‘tower’ rising up from an ensemble of lower buildings that was most prominent. A common feature of both was the concept of a textured outer shell formed by a pattern of raised or sunken vertical surfaces. Their accentuated verticality, which was most clearly visible on the entrance facade, contrasted with the horizontal strips of continuous windows on the sides. With both complexes, a coloured ceramic cladding was used on the facades. A shade of turquoise was chosen for the Komarov Institute, which was lauded in the period press for its ‘unusualness and non-contextuality’.
There were six main buildings interconnected by sheltered walkways, which responded to the original surrounding buildings and completed the southern part of the square Mariánské náměstí. The complex was situated between a planned TJ Lokomotiva sports complex, overlooked by the Y-shaped Building A with offices and public services (postal newspaper service, public toilets, etc.) and the Hněvkovského main access road, where the architect placed Building B, which housed a projection hall and laboratories.
The design of the Research Institute for Antifriction Bearings dates back to 1969, when the first phase for the prototype workshop was built in a period of two years. This building was without the striking textural feature of the facades of the later buildings. On the other hand, its artistic attributes were the sloping lines of its distinct skylight on the roof and the fine vertical lines of the sun breakers. This functional but clearly aesthetic element is a characteristic feature on other buildings Dvořák designed in the 1970s and early 1980s in Brno, such as the Teplotechna administrative building on Anenská street and the Snaha building on Lidická.
The second phase of the construction of the research institute in Komárov started in 1977, at the same time as the construction of the complex on Botanická street (today’s Faculty of Informatics of Masaryk University). The operational assignment and the decreed technology of lift slab construction greatly influenced the layout of the individual buildings. Most are the usual double pile central passage configuration that was common for in many administrative buildings of that time. Jan Dvořák designed the exterior of the facades with a characteristic sculptural rupture to regularly disrupt the pattern on the main façade, which was referred to as ‘ripped architecture’ by colleagues in his studio. In the case of the high-rise building, this principle manifested itself on a truly monumental scale. However, here, the sculpturalness was restricted to the shape of the outer shell of the building and does not reflect its floor plan.
After 1989, the complex in Komárov passed into the hands of a private company, with whom Jan Dvořák, appealing to copyright law, consulted on a modification to the layout of Building B for the purpose of a pharmacy. Unlike the research institutes on Botanická street, the complex in Komárov has not undergone fundamental change. Nevertheless, its individual components are gradually being degraded by decay, which is visible not only on some parts of the buildings, but on the surviving works of art. In the interior of the building, a painting by Vladimír Svoboda, a glass relief in the entrance by Jaroslav Svoboda, and a tapestry in the social hall by Alice Ulmova and Alexander Ulma have all been removed. On the exterior, the metal relief on the facade of the manufacturing hall designed by Vladimír Vašíček is gradually deteriorating and the fountain by Zdeněk Makovský and Ivan Blažek on Mariánské náměstí has been allowed to fall into disrepair. Lack of comprehension and zero respect for the building as an architectural work on the part of the owners has also played a role. The high-rise building of the former research institute, which is today an office building, now displays large-format advertising rather than architectural expression, as do those parts of the original facade covered with featureless cladding.
ŠS