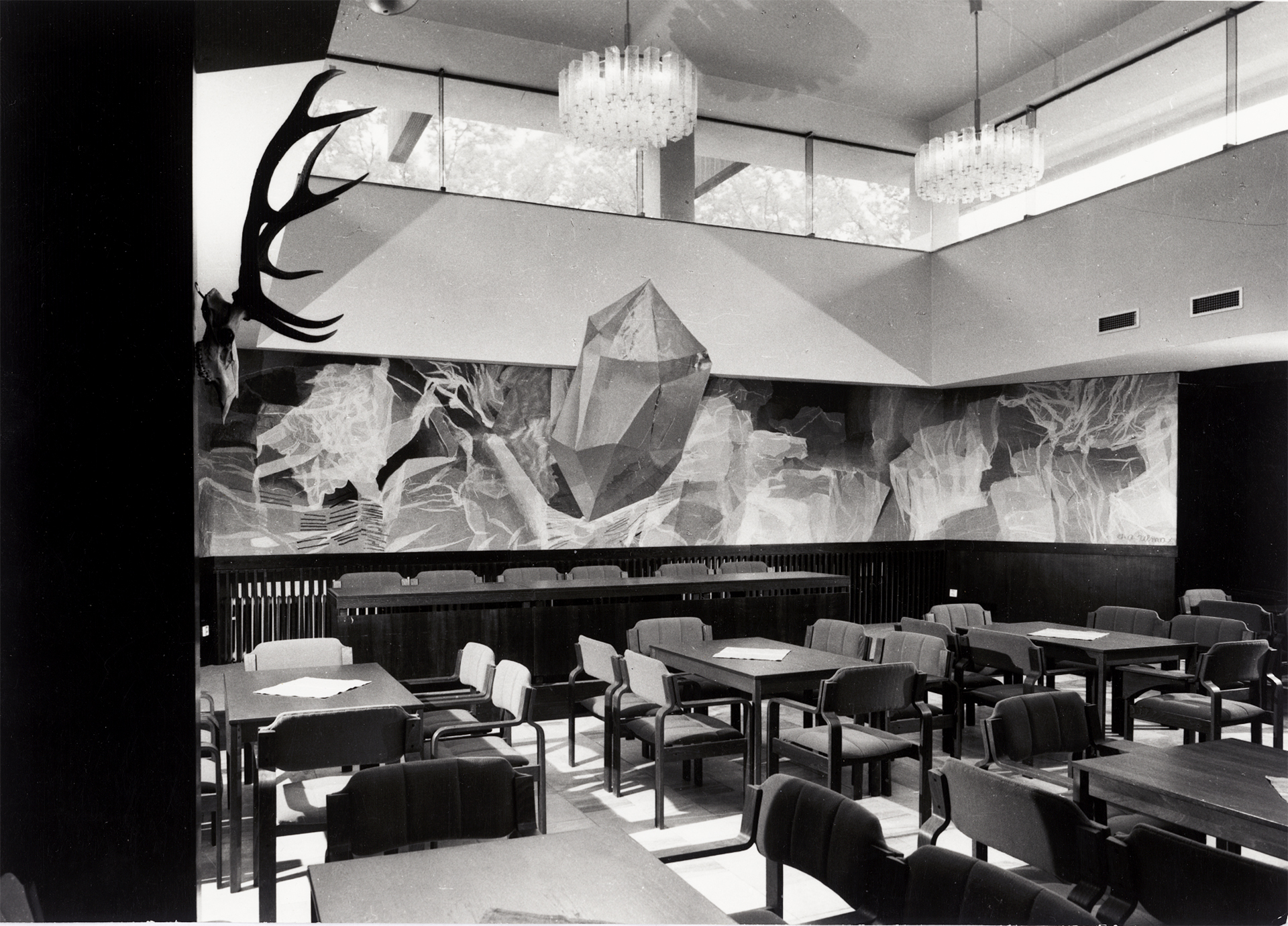 More photos (8)
A number of hotel buildings were built in Brno from the late 1950s onwards to address the shortage of accommodation facilities for visitors to ‘trade fair city’. In the woods above Pisárky, a ‘one-star’ hostel was to be built as part of a recreational and sports complex on ‘the fitness trail’, attached to the Myslivna country restaurant from 1938–1939, which was designed by the architect Bohumil Tureček. The progressively changing requirements in relation to the function of the building and its technical design, including the officially prescribed construction technology to be used, resulted not only in alterations to the original concept of the project, but also repeated delays. Although construction of the hotel was due to start in 1975, it did not commence until five years later. The completion of building was also repeatedly delayed. In the end, in place of the hostel, the building that opened in November 1987 was a three-star hotel with 120 rooms, an entrance reception, a bar, and a conference hall with interpreting booths and other equipment. The next two years were spent reconstructing and increasing the capacity of the ‘old’ country restaurant.
In the original project, the new building was conceived as an equal counterpart to Tureček’s restaurant, i.e., in response to the contours, the two buildings were to be positioned towards each other and connected only by a low walkway. However, in the final version of the design, the hotel building dominates the whole complex. In his design, Jan Dvořák attached a three-storey accommodation block to the restaurant via a lower entrance building with the reception and congress hall. This left the original building some distance from the slightly elevated mass of the new building. Thus, when arriving by the path through the woods, the country restaurant is the first thing the visitor sees, but from the direction of the driveway to the hotel reception it remains completely hidden. Both front facades of Dvořák’s ‘extension’ are equivalent in their significance. The entrance facade is accentuated by the raised body of the staircase and the significantly projecting block of the hotel lobby with reception. The eastern façade, which is visually prominent only when approaching from the woods, is dominated by a sculpturally conceived and projecting elevated corner entrance. The emergency staircase on the southern side of the accommodation block could also be described as a spatial accent, but this was a late addition due to a change in fire regulations during the construction of the building.
The outer shell was designed with ceramic cladding, a typical feature of Dvořák’s work, in combination with bronze anodized aluminium, the colour and structure of which nicely matches the wood cladding of the old Myslivna building. The facade is energized by alternating vertical and horizontal lines in natural hues. The entrance facade of the hotel is ‘decorated’ with shallow relief elements, which on the opposite side of the building contrasts the distinct three-dimensional pattern of glazed balconies, scored by the sharp lines of metal ‘sun-breakers’ of differing lengths. This aesthetically conceived facade, which reflects the nearby branches of trees in its tinted Elektrofloat effect glass, is one of the most charismatic features of the building. This strong artistic effect was balanced on the opposite side by the deployment of artworks − a wooden totem by Miloslav Vlček and the typographically emphasized name of the hotel by the entrance by graphic designer Jan Rajlich Sr. The pictograms he designed for the interior of the hotel still catch the eye.
The interiors of the reception, snack bar, congress hall and rooms were fitted out with a combination of mass-produced furnishings and originally designed accessories and artworks from that time. As in previous works, Jan Dvořák collaborated with many artists, such as Vladimír Svoboda (hanging paintings), Alice Ulmová and Alexandr Ulma (tapestry), Jaroslav Svoboda (glass relief), Jiří Coufal and J. Alexa (wooden relief). Dvořák himself designed the light fixtures for the restaurant. On the other hand, the older parts of the building are thematically furnished and the space is reserved for ‘hunting kitsch’, such as hunting trophies, wooden objects and copies of historical prints with hunting motifs. The original Myslivna restaurant building and the newly built parts of the hotel were to remain clearly distinct by way of the interior furnishings.
At present, it is not easy to properly experience the effect of the interior spaces. During the uninterrupted course of operation of the hotel and restaurant, successive layers of its short history have built up in the interior of both buildings, which have become swamped with leaflets, information boards, automatic shoe cleaners, massage chairs and randomly purchased and even more randomly placed pieces of furniture. As the hotel belonged to the Brno City Municipality until 2011 and received hardly any kind of investment, its authenticity was largely preserved, albeit in a somewhat peculiar form in certain places. In the hands of a private owner, the Myslivna is now undergoing gradual modifications to the interior and the space of the summer terrace, but with no attempt at any kind of conceptual, let alone discerning architectural design.
ŠS