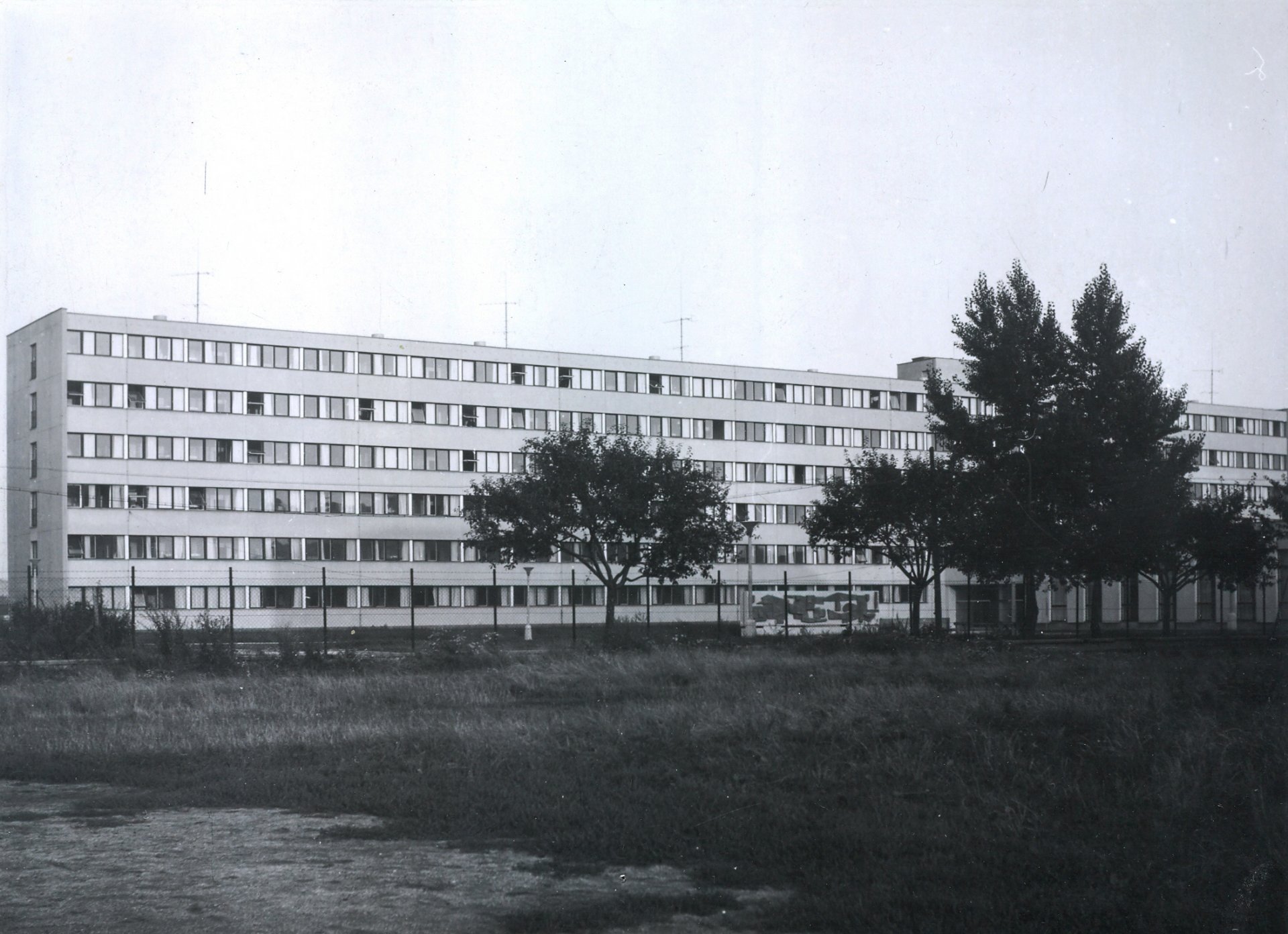 More photos (17)
This former hostel for foreign specialists is among the first of Jan Dvořák’s projects at the regional design institute Stavoprojekt Brno. At that time, the institute’s priority was the construction of housing and Dvořák also worked in a team of architects and designers on the project of Staré Brno-South Housing Estate. The architect sought to bring new aesthetic and structural solutions to that design with modifications to the widely used prefabricated panel building type G57. He designed a modified type with significant horizontal segmentation by means of continuous windows and sills, which was underscored by the recessed plinth of the building’s ground floor. Although this design was not in the end used for Staré Brno-South Housing Estate, Jan Dvořák made use of it in the project for the India Hall of Residence.
At that time, it was reported in the press that the investor, První brněnská strojírna, was willing to manufacture equipment that could modify some elements of the building. Transverse load-bearing walls and self-supporting perimeter panels were combined into one unit, which resulted in both cost reductions and an enhanced ‘artistic effect’. The result was a horizontally segmented building for the 240 single and double rooms of the hall of residence, which featured rows of continuous set-back windows and distinctive window sills that enhanced the three-dimensional effect of the whole facade. To avoid unnecessary heat loss, the continuous windows had a combination of opening and fixed glass panels. A single-storey administrative and social block runs through this six-storey building at a right angle in the golden ratio, which has a textured but vertically divided facade that contrasts with the main building. The play of the horizontal lines of the varyingly textured segmented façade with the vertical pattern of wide lesenes illustrates the architectural expression that would characterize Dvořák’s buildings in the following decades.
The resulting architectural design is a synthesis of the architect’s rational considerations, as reflected in both the structure of the building and its functional division, and the demands for the aesthetically new effect of enhanced texture on facades that was typical of late functionalism. The severity and purity of the building’s morphology, which follows in Brno’s interwar tradition, was originally accompanied by colourful accents of bright yellow curtains and dark blue window frames (which are now white plastic). With regard to supplementary artworks, the main entrance from the outside was ornamented with a double-sided decorative ceramic wall by the sculptor Ladislav Martínek (1965–1966). For the interior, the architect commissioned the painter Milan Klvaňa, who decorated the entrance hall, and Pavel Navrátil, who created two abstract ceramic mosaics for the ballroom (1963).
The building now serves as a hall of residence for students of Masaryk University. While the exterior ceramic wall was removed from the forecourt of the building, other works of art have been preserved, although they have been affected by new functional modifications to the building. As the original social hall was transformed into a gymnasium, Pavel Navrátil’s works found themselves in an unusual, though not wholly undesirable context. This cannot be said for one of the reliefs by Milan Klvaňa, in front of which an inappropriate ramp was installed, a feature that now dominates the entrance area. Nevertheless, despite a number of structural modifications, the current operator of the building, Masaryk University’s Accommodation and Catering Services, has managed to retain its original architectural expression.
ŠS