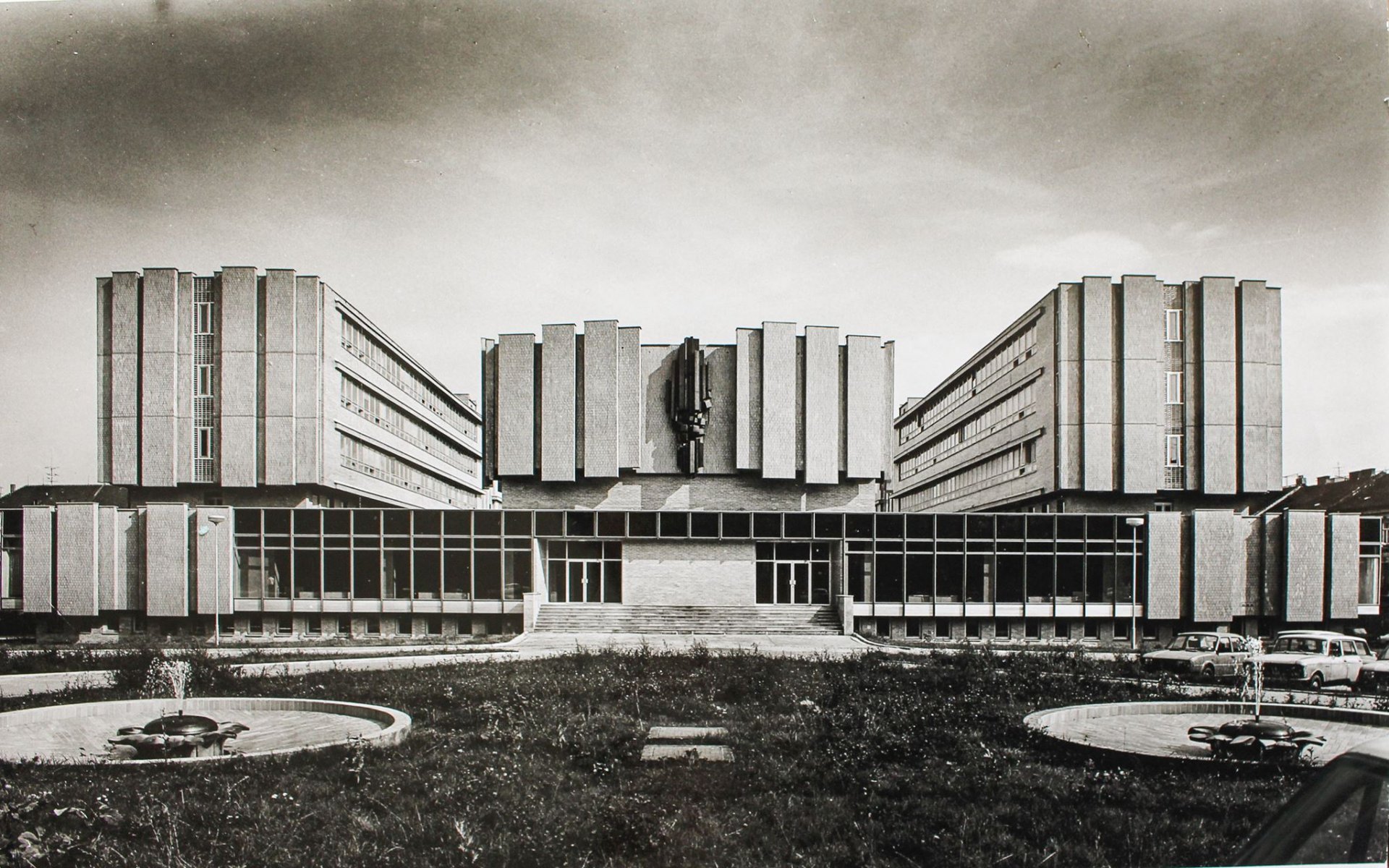 More photos (6)
This extensive complex for four different research institutes was built on the site of a former enamel works that was partially destroyed during the Second World War and later gradually cleared. It was home to the Institute for Research and Design of Pozemní stavby Brno, the Prague Institute for the Rationalization of Management and Work, the Žilina Research Institute for Transport and the Bratislava Research Institute of Civil Engineering. The buildings they formerly occupied, which were scattered around the city, no longer suited them, and it was decided, under the auspices of the Ministry of Construction, that the institutes would come together in one complex where they could share technical facilities.
The architectural design was drawn up in the Czech Association of Manufacturing Cooperatives by the architect Jan Dvořák. He created two identical six-storey buildings, which were connected by a lower, two-storey building with an entrance hall, reception and congress hall. This produced a complex with a U-shaped layout, with the addition of a testing hall in the rear. While the side wings were quite ordinary in terms of layout and material design, similar to many office buildings of that time, the architectural originality of the central part was almost artistic in its conception. Viewed from the outside, the dominant mass of the congress hall loomed above the glazed ground floor and formed the complex’s most striking, monumental architectural feature. Dvořák enhanced the three-dimensionality of the design with the vertical pattern of cleavages on the front facades, which played out across the whole of the facade. This impressive effect was enhanced by a six-metre iron relief by the Brno sculptor Sylva Lacinová, which, along with two ceramic fountains, artistically consummated the composition of the main entrance to the complex.
The interior of the building was also adorned with many artworks. The central work was a semi-circular mobile object with glass curtain by the artist Jaroslav Svoboda, which divided the reception area for guests from other parts of the entrance hall. The staircase was ornamented with iron reliefs by Jiří Fusek and Věra Krylová, and the system of orientation markings was designed by the Brno graphic artist Jan Rajlich Sr. Artistic decoration was also present in the congress hall in the form of tapestries by Alice Ulmová and Alexander Ulma and a mirrored ceiling by Vratislav Šotola and Rudolf Jurnikl. There were also works of art by Vladimír Svoboda in the boardroom. Thus, this workplace for scientists and professionals could also function as a specific cultural centre in which exhibitions could be held.
After the change of political regime, the Faculty of Informatics of Masaryk University acquired the premises. For the needs of a higher education institution, it was necessary to partially reconstruct the buildings and modify the layout. The auditoriums were modernized and there were several extensions to the rear wing, which closed the previously partially open courtyard. The building’s architect, Jan Dvořák, instituted proceedings that led to a long court battle with representatives of Masaryk University over these changes. After his death, when the possibility of enforcing copyright law was significantly reduced, much there were more radical changes. In 2012, the entrance to the complex, including the aforementioned features, had to make way for a new architectural concept by the studio Pelčák and partner architekti. The authors of the new architectural concept had the once impressive entrance building removed and built a new entrance building in its place. Of the original works of art, only the exterior sculpture by Sylva Lacinová has been preserved, but its future is uncertain. Both of side wings were preserved with only modifications to the stairs and necessary changes to the layout. In connecting the new part of the building, the architects very self-confidently slammed it onto the original remaining wings.
ŠS