Directorate General of the Mining and Metallurgic Company 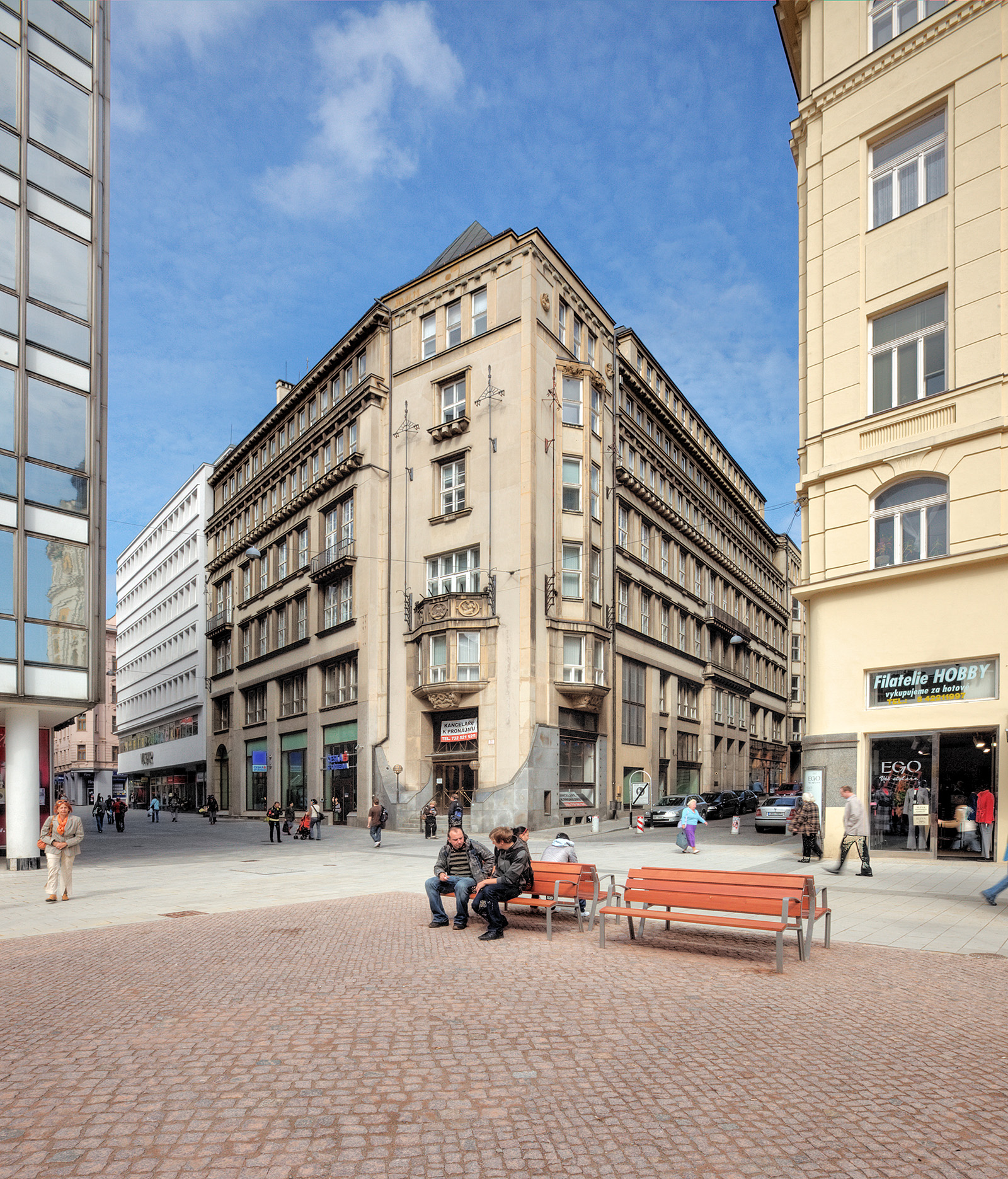 After the dissolution of Austria-Hungary, the management of the Mining and Metallurgic Company decided to move its headquarters from Vienna to newly formed Czechoslovakia in order to retain control over its mines in northern Moravia. They chose Brno as their new seat due to its proximity to Vienna, and had the buildings of the directorate general, two villas for the managers and an apartment building for the staff designed by Vienna-based architect Karl Lehrmann built in the city. The corner building of the directorate at the intersection of Kobližná and Sukova streets was designed as a multi-purpose facility serving both the company and the general public. The requirement for the representative nature of the building was satisfied by a Classicist monumental design in the spirit of Vienna modernism and late historicism; the advanced ferro-concrete skeleton enabled the erection of the tallest building in Brno at the time. The facades are segmented by prominent cornices with dentil and decorated with polygonal arches with special relief ornamentation. It also features stylized Antique-style figures bearing the company's logo of two crossed hammers and other mining instruments. The corner entrance led to a café on the ground floor, which also housed shops and a marketplace in Sukova Street. It also featured a separate entrance to the company's office areas; the entrance is enhanced by portals with relief decoration of miners' heads wearing helmets. The company's offices located on the floors were accessible from the spacious lobby decorated with pilasters and leading to a spiral staircase, paternoster and elevator. One of the pillars of the staircase features a relief of working miners wearing waist braces by the Viennese sculptor Winkler . .The multi-purpose nature of the building was enhanced by the apartments in the loft.The Mining and Metallurgy Company decided to move its headquarters from Brno to Prague in 1927 and its Brno building was purchased by the Brno Country Capitals Savings Company, whose headquarters designed by Jindřich Kumpošt and situated in Brno – Královo pole were no longer sufficient. Vladimír Fischer designed the modifications necessary for the needs of the savings company and involving moving the main entrance and foyer with a statue of T. G. Masaryk to the corner, from where the main lobby on the mezzanine was accessed. The offices, registry and conference room were situated on the first floor. The current appearance is the result of several later adjustments removing the ground-floor commercial areas with steel display windows and relocating the counters to the ground floor. The RAW studio implemented the successful adaptation of the former marketplace in Sukova Street and the adjustment of the ground floor to suit the needs of the HaDivadlo Brno in 1991.

Name
Directorate General of the Mining and Metallurgic Company