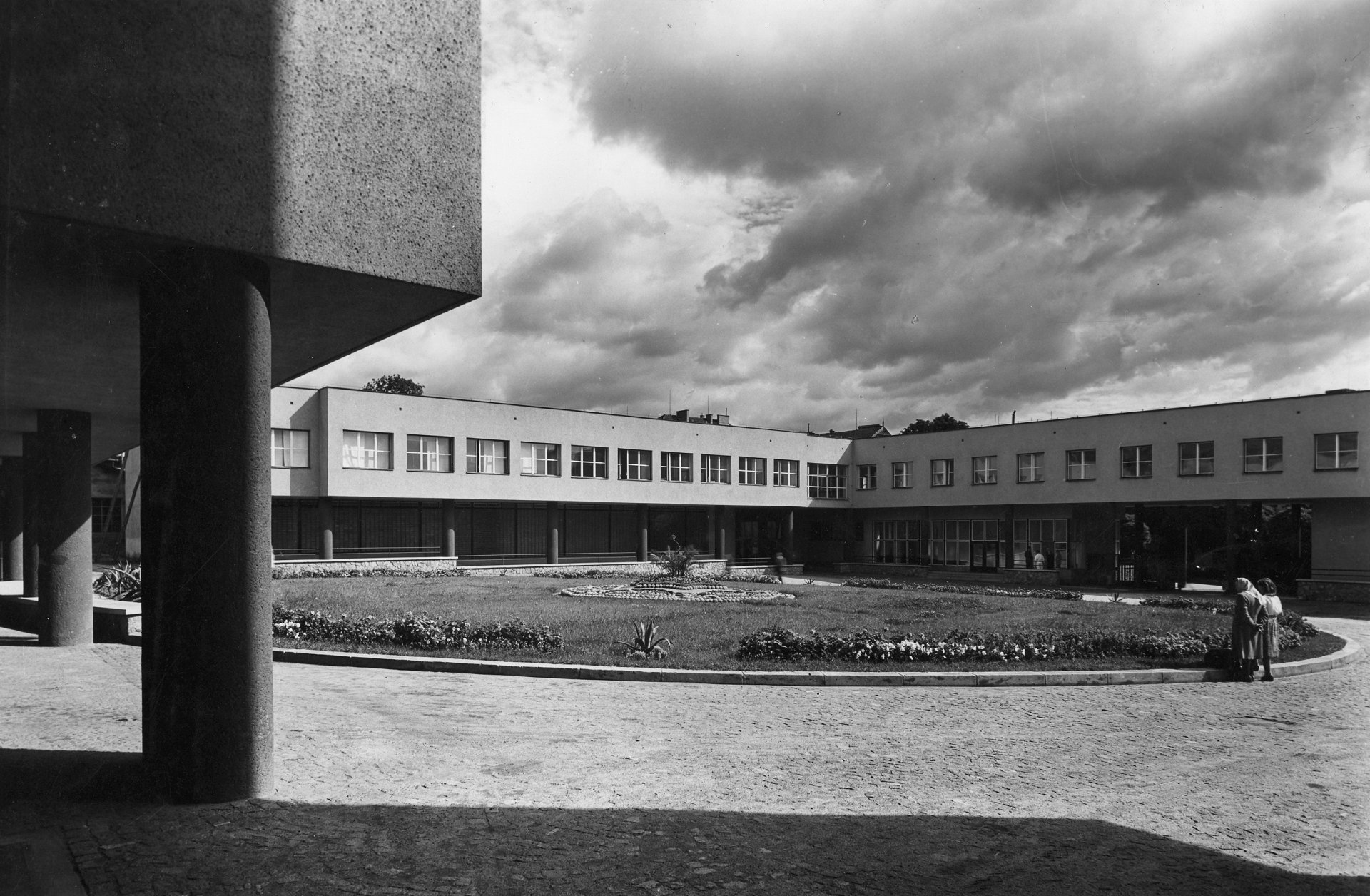 More photos (11)
The first specialized hospital for the treatment of children was founded in Vienna in 1787 and inspired similar institutions in other European cities. From 1809, there was a short-lived specialized private clinic in Brno for the paediatric patients of the physician Ernest Karel Rincolini. In 1844, Ferdinand Dworzak appealed to the citizenry of Brno to contribute to the establishing of an association for the common good to create a foundation for a children’s hospital that would primarily treat children from poor families. As a result of his commitment, in 1846, a clinic with twenty-eight beds was established on what is now Kounicova street. Although it was gradually enlarged, its capacity continued to be insufficient, and, in the mid-1890s, a building fund was established for the construction of a new hospital, for which the city donated a large plot of land at the top of Černá Pole hill. Hugo Kranz, Moravia’s head of construction took on responsibility for the architectural design. His design for the children’s hospital was in the form of six specialized pavilions, which were fully electrified and supplied with water from the newly established water pipeline from Březová. The hospital was built in the years 1897–1898,
Although the hospital complex served its purpose for sixty years, extensive damage to the buildings at the end of the Second World War and developments in the field of medicine led to the need to build a new hospital. The new concept for a specialised medical clinic for the treatment of children was entrusted to Prof. Otakar Teyschl, director of St. Anne’s University Hospital, Dr. Vladimír Mazal, newly appointed director of the Children’s Hospital, and the architect Bedřich Rozehnal. The architect had specialized in the construction of hospital facilities since the 1920s, and his buildings were to be found throughout Moravia. When designing hospitals, Rozehnal always considered the needs of doctors and consulted with them at length. This form of mutual cooperation led to the creation of top modern medical institutions. With possible future technological developments in mind, Rozehnal also designed buildings in such a way that they could be adapted over time to accommodate new medical equipment.
The final concept of the Moravian Children’s Hospital in Brno was approved by the Congress of Paediatricians in 1948, initiating the first phase of construction on the new complex. The old hospital would continue function during this time. Rozehnal departed from the pavilion design that was usual for that time in favour of a more modern block design, which functionally connected the individual specialized departments. The first building to emerge was the economic and administrative wing. In the next phase, up to the year 1953, the central entrance hall with glass ceiling (now Teyschlova Hall), and wings for out-patients, operations and in-patient wards were built, which were interconnected. The dominant feature of the complex is the six-storey block with wards for in-patients with a Y-shaped floor plan and continuous terraces oriented towards south-western city skyline, which shows a marked influence of Le Corbusier. The terraces, with their procession of huge columns, were used for giving patients exposure to the sun and fresh air, which was supposedly beneficial for the mental well-being of the children. In this sense, Rozehnal’s intention was for the hospital and its architecture to motivate the patient to recover.
Thus, in the early 1950s, the Children’s Hospital became the final functionalist building in Brno, when the official politically prescribed style was already socialist realism. Its aesthetic design and well-thought-out concept, which Bedřich Rozehnal elaborated in the book Cesta k řešení nemocniční otázky města Brna. Projekty zemské klinické nemocnice a státní oblastní dětské nemocnice v Brně [Solving Brno’s Hospital Problem. Designs for the Moravian Clinical Hospital and the State Regional Children's Hospital in Brno] (Brno 1949) was soon acknowledged by architectural professionals around the world, including Le Corbusier himself.
Construction was supposed to follow in subsequent years with facilities for internal medicine and an infectious disease clinic, but Rozehnal’s project was not implemented. It was reworked in the early 1960s by Karel Volavý and Eduard Říha, when Rozehnal was politically persecuted and imprisoned. On the basis of Rozehnal’s overall plan, they designed the building for the 2nd Department of Pathological Anatomy.
After the Velvet Revolution, with the further development of medical technology and methods, and thanks to support from Olga and Václav Havel, the Children’s Hospital complex was extended, partly realizing Rozehnal’s idea for ​​a comprehensive medical care centre. The design of the new Pavilion F was drawn up by the Tuffy architectural studio under the direction of Zdeněk Jánský and was built in two phases. In the years 1994–1996, building F was constructed for intensive care medicine, and in the period 1996–2001, building G was built for a paediatric internal medicine, oncology, radiology and other departments. During this period, the almost fifty-year-old buildings Rozehnal designed were also renovated.
LV