Operations building of the Karat cooperative 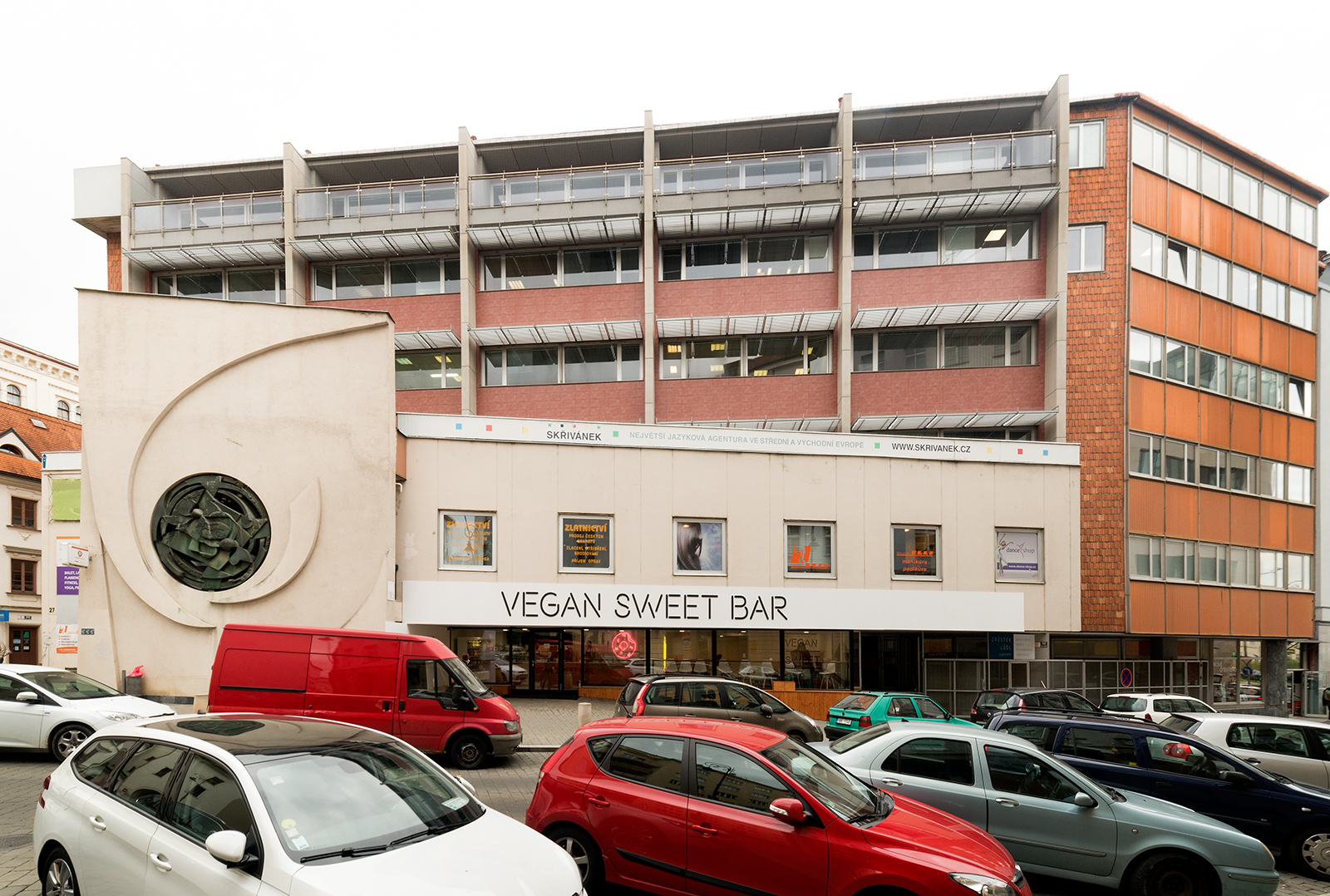 With the construction of the building for the Karat production cooperative, which was completed in 1976, the architect Ivan Ruller made a significant symbolic entrance into the historical centre of Brno. Up until the 1970s, the cooperative, which had been an association of goldsmiths and jewellers since 1945, operated in several different locations scattered around Brno. In 1971, they decided to build a new building that would concentrate all the cooperative’s activities, i.e. sales, production and administration, in one place in the city centre. The project was elaborated by Ivan Ruller, who was at that time working in the Department of Chief Municipal Architect. Due to his political disposition, he was also working under pedagogical and publication restrictions during the period of normalization. For the vacant trapezoid plot on the corner of the streets Orlí and Novobranská, close to the medieval Měnín Gate and the functionalist police headquarters designed by Jaroslav Grunt and Jiří Šálek (C111), he designed a six-storey building with underground garages. The massing arrangement and architectural details were a response to the ground plan, the surrounding terrain and its urban context.

The facade onto Novobranská street smoothly followed the street line of the adjacent historical palaces while retaining a slightly withdrawn ground floor for businesses, featuring a sculpture by Zdeněk Macháček. The other side of the Karat building, facing Orlí street, was much more structured and segmented. Ruller situated the main entrance outside the main body of the building in the form of a monumental covered stairway illuminated from above by a curved glass roof. A 3-metre circular sculpture from wrought copper by the artists Jánuš Kubíček (member of the creative group Brno 57) and Josef Vohrabal penetrated the sculpted light plaster wall of the stairway. This formed the artistic decoration for both the exterior and interior of the covered entrance, from where it offered partial views of the street through the apertures in the sculpture. The south-west facing facade of the Karat building, with its jewellery production facilities and offices on the upper floors, diverges on Orlí Street and splits into two visually distinct variants. As with the northern façade, the part connected to the apartment building on the corner of Divadelní street is dominated by alternating strips of rectangular two-part windows with under sill areas of corrugated orange sheet metal and is clad with brick tiles along the sides. In contrast, both in colour and material, the part above the main entrance and garage is patterned by the protruding ribs of sun breakers and the perforated shading of the windows. As with his other projects, Ivan Ruller was both careful and courageous in his choice of artists to adorn the building with art works. The interior of the goldsmiths’ cooperative building featured a sculpture by Vladimír Preclík, a sculptor who the communist authorities disapproved of and who, in the 1990s, became the Dean of the newly founded Faculty of Fine Arts in Brno.

The building served as the base for the Karat jewellery cooperative’s operations and administration until shortly after the Velvet Revolution (although manufacturing activity was moved to premises on Palackého street earlier). After changes to the property laws, the building was sold in 2003, turned into shops and offices, and adapted for the use of other private companies. Its architectural form has been very well preserved despite subsequent modifications, such as the replacement of the under-sill corrugated metal in the area of sun breakers with ceramic tiles of a different shade and the installation of new windows. The building is still a fine example of 1970s architecture and, though contemporary in its expression, design and detail, it is respectful of its predominantly historical setting.