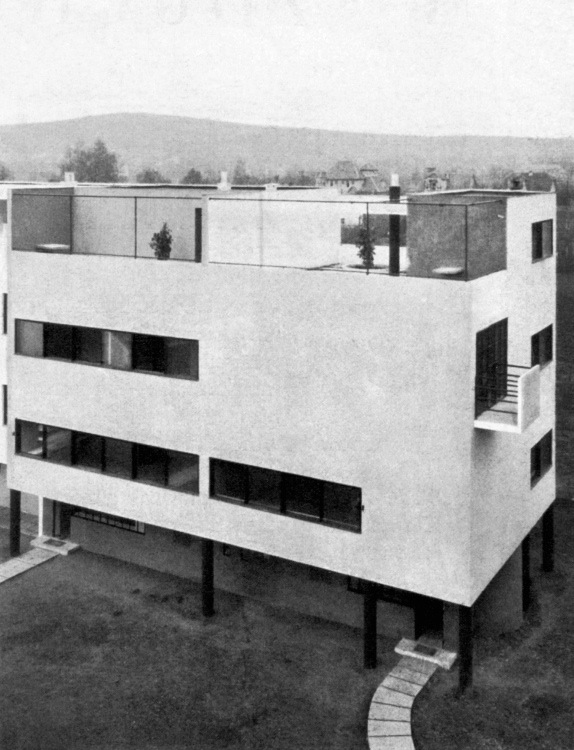 The semi-detached house designed by architect Hugo Foltýn, which closes the row of terraced houses by Jan Víšek and Miroslav Putna in Drnovická street, can be considered the largest architectural experiment in the New House estate. Only twenty at the time, Foltýn designed a structure which reveals his knowledge of Le Corbusier's architecture, mainly the Citrohan house in the Stuttgart Weissenhofsiedlung estate from 1927.
This house on a square ground plan formed a single whole with the neighboring residential unit by Miroslav Putna; however, their layouts and conception of the interior space could hardly differ more. Foltýn's structure originally featured a partially open ground floor on pillars which formed a part of the supporting ferro-concrete skeleton that freed up the ground plans of individual floors and permitted the use of a glazed facade. A spiral staircase ascending to the residential roof terrace provided access between the floors. The residential hall elevated over two stories and overlooking the street through a long ribbon window was the central element of the house. The second floor housed a gallery open to the hall and linked with a bedroom. This level was lit by a grid window with a balcony on the side facade, which also created a cathedral-like light effect in the main hall. Another bedroom and bathroom were situated on the mezzanine accessible via the staircase from the gallery. Their raised areas were lit by the ribbon window of the garden facade.
This mingling of various levels creates a vertically flowing space based on Le Corbusier's raised hall as well as Adolf Loos' interior layout. The fact that the individual rooms were not closed, which created light effects in the space, was also unique. Foltýn aspired to create a perfect "housing machine," which would defy conventions and whose interior would be an inexhaustible source of fascination. At present, the site of Foltýn's experiment is occupied by a commonplace terraced house, the result of a complete reconstruction to satisfy the conventional needs of later users.