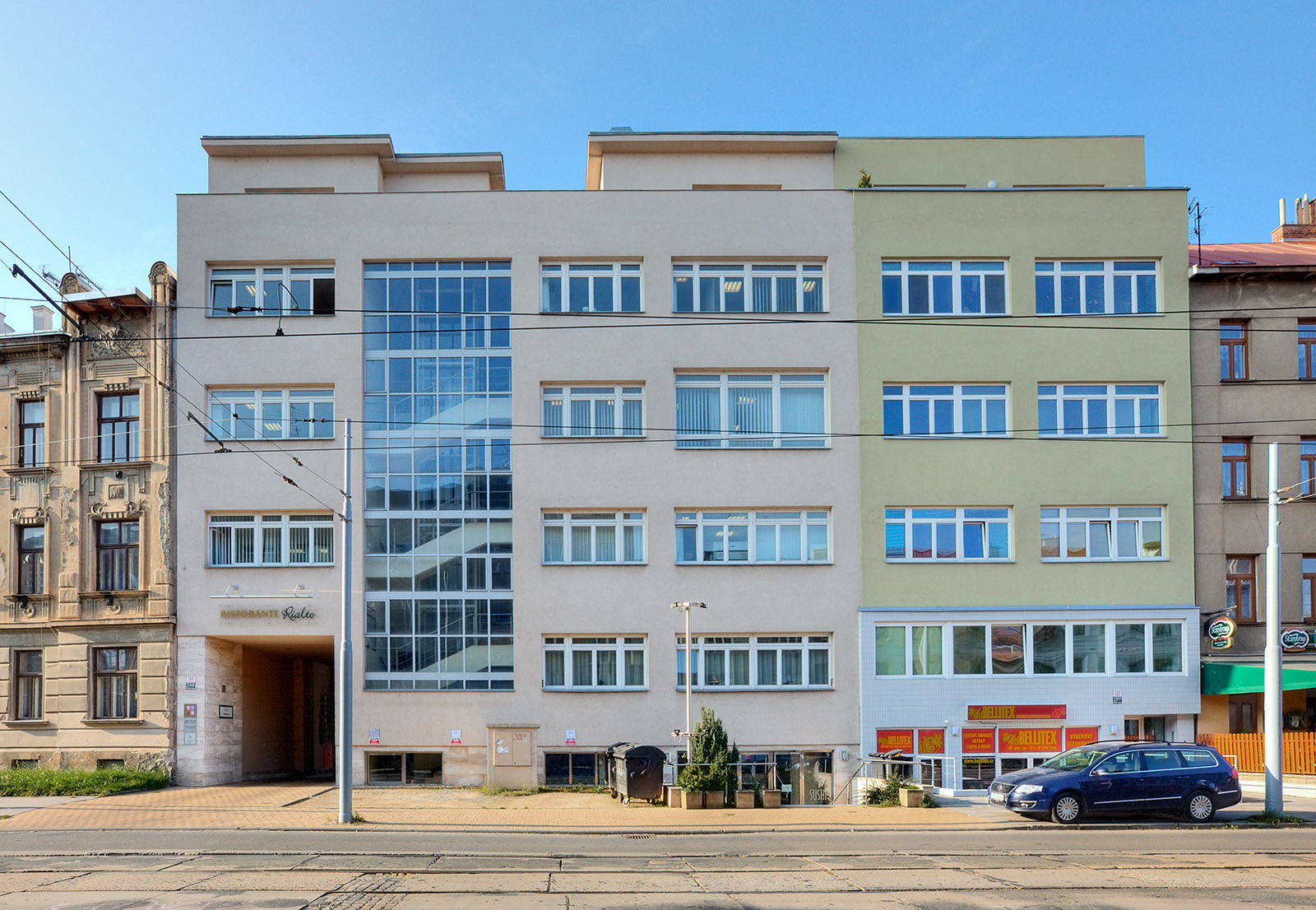 In the early 1930s, MUDr. Václav Šilhan, who had worked at the Clinic of Gynecology and Obstetrics since 1924, decided to open his own gynecological sanatorium. The task to design the clinic in Veveří Street was assigned to Jan Víšek, who managed to create a modern building whose minimalistic esthetics corresponded to the clinic's cutting-edge technological furnishings. The architect also cooperated with his customer at stage two of the development, which involved the adjoining house owned by the Šilhan family on the neghboring plot.
The layout of the six-storey sanatorium building was ingeniously arranged so that the individual areas were functionally linked and offered maximum comfort to the patients. The entrance was situated in the gateway on the left, which led to the check-in hall and waiting room. The patients were admitted to the consulting room and then to the surgery adjoined by an X-ray room and laboratory. After the examination, the patients could rest in the day room with sanitary facilities, which led back to the entrance hall. The first floor housed single and double bedrooms, a kitchen and a consulting room leading to the garden veranda; the second floor also featured a spacious operating theater. Rooms, together with service rooms and a terrace, were also located on the third and fourth floors. The plain street front segmented by rectangular windows is accentuated by the vertical glass wall of the staircase. The gateway entrance on the left-hand side is balanced by the large window of the operating theater on the second floor.
Shortly after the completion of the sanatorium, Václav Šilhan decided to build his own house on the neighboring plot. Its facade is formally linked to the older building; only the basement and ground floor are emphasized by light ceramic cladding. The basement housed a large hall with a piano, open toward the garden, and the dining room facing the street. The dining room was adjoined by the preparation room and kitchen situated in the basement of the sanatorium together with the larder, cellars and the caretaker's apartment. A staircase ascended from the common room to the ground floor, which was interconnected with the neighboring building and housed laboratories and rehabilitation rooms. The first floor with the raised hall was occupied by the children's rooms as well as the owner's room connected to the admission room of the sanatorium. The second floor featured the family's bedrooms, the third floor was an extension of the inpatient ward of the sanatorium and the fourth housed staff rooms and a terrace. The interiors of both buildings with bathrooms paneled with opaxite, inpatient and common areas equipped with modern furniture made of bent steel and the marble paneling of the common entrance hall were also exquisite.
During World War II Václav Šilhan joined the Protection of the Nation resistance movement and donated 100,000 Czechoslovak crowns for the procurement of medical materials. He was arrested by the Gestapo in 1942 and transported to the Mauthausen concentration camp, where he presumably died. In 1954 his private sanatorium became part of the Gynecology and Obstetrics Clinic of Brno Faculty Hospital and continued to serve its original purpose. However, the conditions considerably deteriorated during the period of Communist rule. After the Velvet Revolution the clinic was restituted and its private owner reconstructed the building completely after a vast fire in 2003.