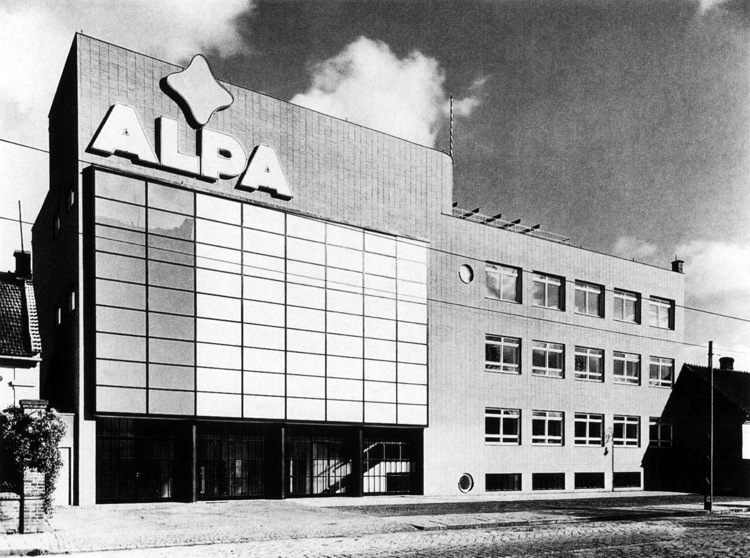 Fuchs' design of the Alpa administrative building in Palackého Street won the architectural competition that also drew submissions by architects Bedřich Rozehnal and Jan Víšek. However, only half of the original design involving a nearly symmetrical pair of five-level buildings linked by a glazed corridor over the main entrance was built in 1936.
The four-level administrative block with the owner's apartment faces the street, while the company's production areas and warehouses were situated in the inner tract. The left of the front is dominated by a glazed facade, over which the company's logo was originally placed. The light ceramic cladding of the right-hand side of the street front is segmented only by the grid of windows. The artistic contrast of both parts of the front creates an intriguing aesthetic effect and breaks the bulky volume of the structure, accommodating it to the adjoining lower development.
The Alpa company specialized in the production of chemist's goods, especially the well-known Francovka, registered as an Alpa trademark in 1913. The company was based in Brno until 1948, when it moved to Velké Meziříčí, where it remains in operation. After Alpa moved out, the Králové Pole premises were taken over by ZPA Brno. In 2008, the entire complex changed hands again and Fuchs' building is now undergoing a reconstruction that aims to remove unoriginal architectural features.