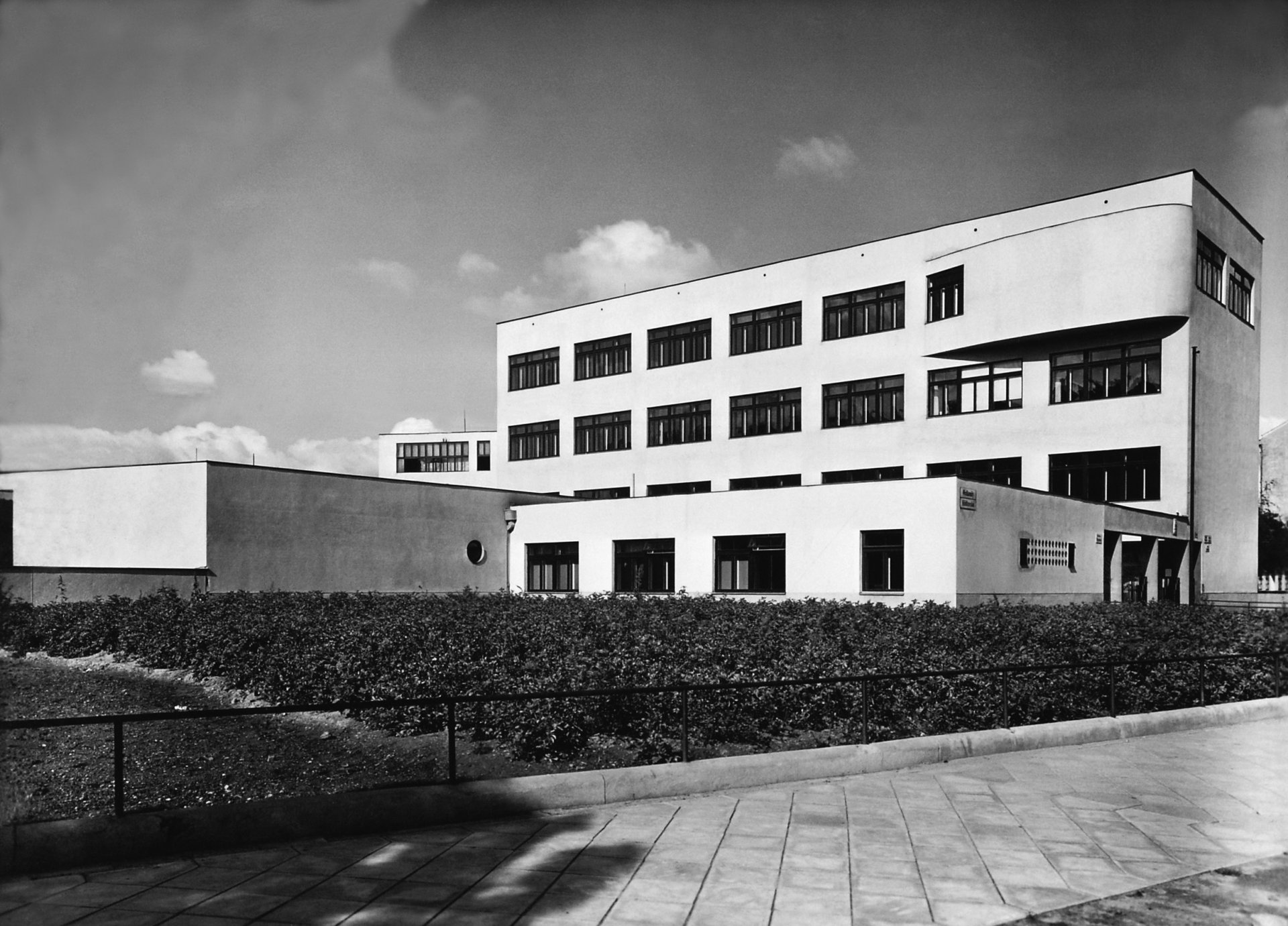 The 1920s witnessed new teaching demands (for example, the presence of specialised workshops in the school building) and hygienic requirements (smaller, well ventilated and lit classrooms) being asserted in the modernist designs of school complexes. Architects emphasised the placement of the school building in relation to the cardinal directions and surrounding development. Fuchs' design for the school in Křídlovická Street originally included two buildings - a boys' school and a girls' school - with a shared gym and cafeteria. However, only the boys' school was built in 1927; the girls' part was not completed until 1938-39 according to the design by Josef Polášek.
The main front is dominated by a large staircase window over the entrance risalit with a terrace. The boys' school was divided into a section with teachers' offices, the headmaster's office and staffroom, adjoined by the gym in Křídlovická Street and a rectangular wing with classrooms parallel to Nádvorní Street. Each floor of this wing contains a row of four classroom facing east and overlooking the yard; the corridors with locker rooms look out onto the street. The basement housed workshops with modern equipment, storage areas and technical rooms. The combination of the ferro-concrete skeleton and brickwork enabled the expansion the window openings so that these covered nearly the entire width of the classrooms; the lighting was controlled by different glazing using opaque or transparent windowpanes. The classrooms were equipped with the latest built-in furniture made at the Brno UP plants.
The addition of Polášek's girls' school from the late 1930s does not respect the original design by Fuchs. Polášek chose an entirely different design for attaching the wing with the classrooms to the volume of the gym, thus enclosing the complex with sports grounds in the inner court. The main four-level building of the girls' school consists of a plain block with a grid of large windows facing southeast and providing for optimal natural classroom lighting in the morning. The elliptical risalit on the first floor of the yard facade is the only prominent feature. The school was equipped with built-in furniture designed by the architect and also featured modern workshops.
A nursery school was later added to the girls' school. The single-level building was composed of cubes linked sideways to the girls' school and adjoining the wing housing a specialised children's advisory centre. The playroom and cafeteria have glazed walls facing south and overlooking a small yard with a sandpit, where children could play in the safe haven of the closed yard.