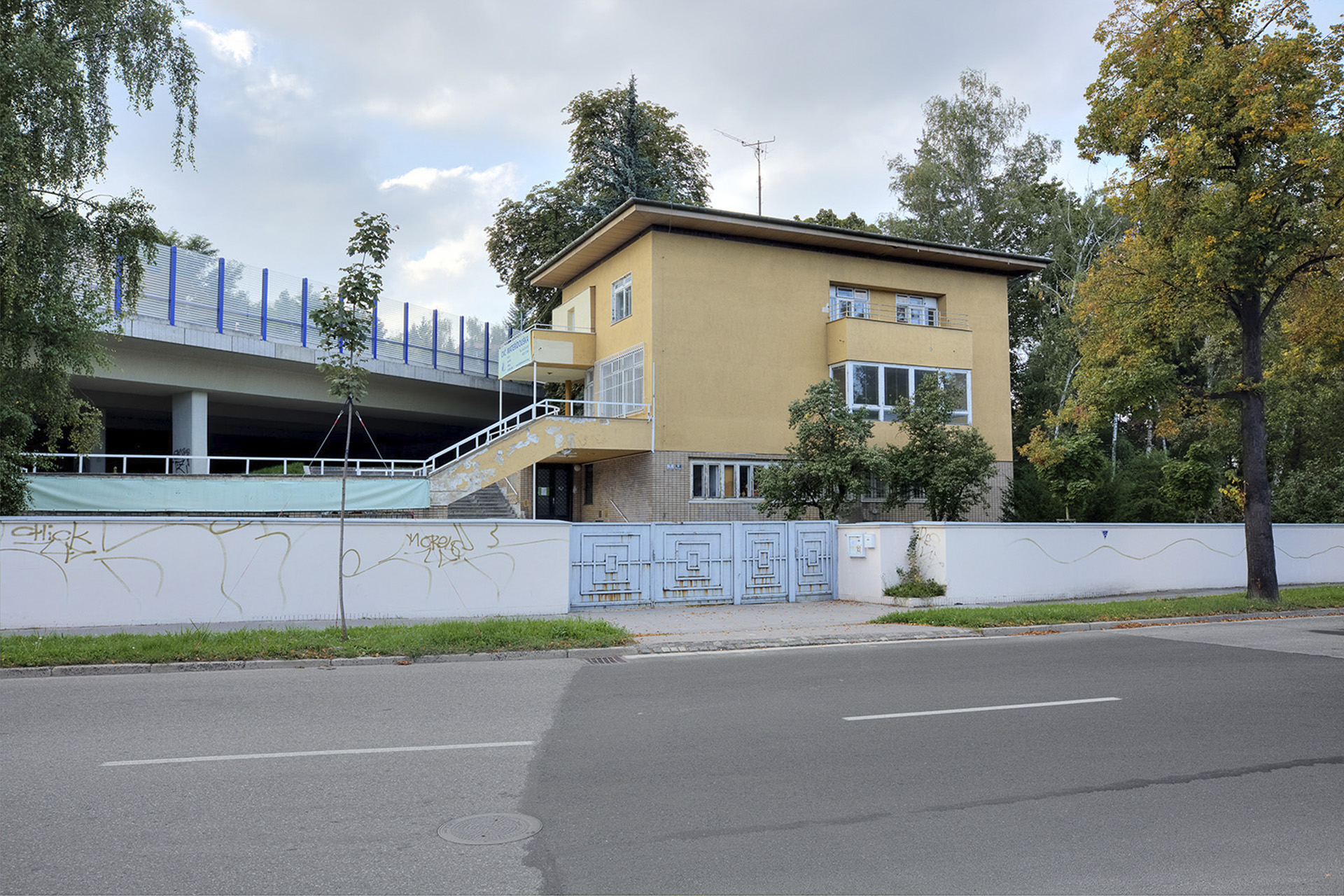 The Kuba brothers' building activities made an enormous contribution to the development of interwar Brno. Alois' entrepreneurial skills and Vilém's designs resulted in the building of several hundred terraced houses and apartment buildings boasting sophisticated architectural and economic concepts. Alois Kuba's villa enjoys a unique position in the context of Vilém's architectural works. This is not only for the villa's generous concept and the volume of financial resources invested, but also the architectural quality of the setting of the structure in the terrain of the garden as well as a number of original details.
The two-storey villa is situated on a sloping plot, originally a large garden. The main entrance is sunk below the level of the ground and is accessible via a wide staircase. The prominent curve of another staircase spans this entrance yard and links the house with the terrace on the roof of the garage. The ground floor housed the janitor's apartment and servants' rooms. The staircase in the entrance lounge leads to the hall upstairs lit by the round glazed wall of the conservatory. This is where the living room and kitchen are situated. The bedroom, dressing room and bathroom are located on the top floor with another roofed terrace. The vast basement held service facilities including a central heating boiler room and an air raid shelter. One can marvel at both the technical equipment and some dynamic architectural features such as the ceiling hole for the portal of the staircase on the ground floor or the distinctively protruding cornice. The interior of the house was equipped with furniture designed by the Kuba brothers and manufactured by the UP company of Brno.
Held for a short period of time by the Gestapo in 1943, builder Alois Kuba was forced to sell the villa to Edith Piesch, a Brno citizen of German origin, and move to his apartment in Kotlářská Street within one month. (He acquired another villa in Barvičova Street by Mojmír Kyselka shortly thereafter.) After the war the villa was confiscated and served as a healthcare facility. In 1957, a nursery school was set up in the villa; twenty years later it became the headquarters of the StB (State Security). After the revolution, the house was transferred to the City of Brno and its further use is the subject of negotiations. The seriously dilapidated villa was also damaged by the construction of a nearby road. Thanks to efforts in the profession, the villa was finally declared an object of cultural heritage in 2009.