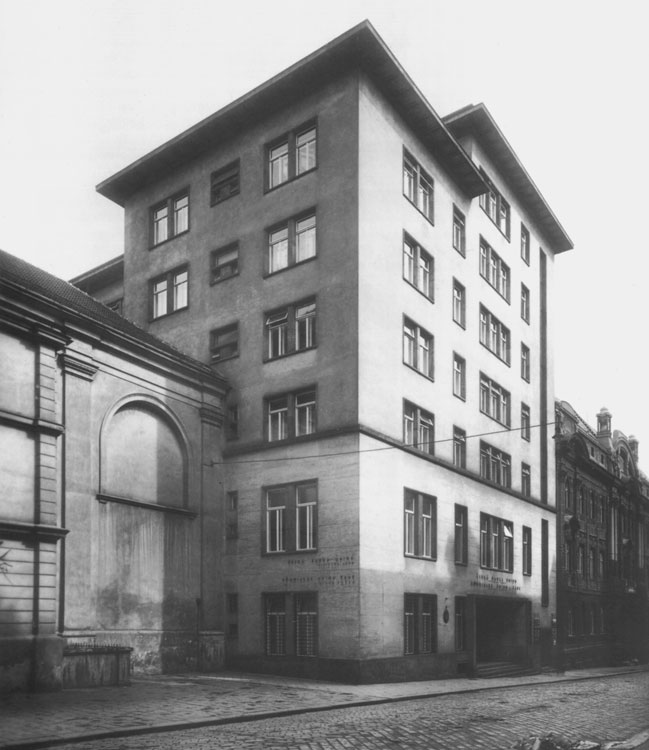 The vacant parcel resulting from the demolition of the former Jesuit monastery in Beethovenova Street was filled by the building of the Brno branch of the Czech Union Bank in 1921-25. The vertical mass of the street front, highlighted by the continuous staircase window, is an equal match to the massive tower of the adjacent Jesuit church, to which it is optically linked by the distinct two-level travertine base. Like the Moravian Country Life Insurance building in Mozartova Street, with which it forms a single unit, this structure also elicits a  monumental and presentable impression and features fine details and high quality materials. The symmetry of the facade formed by the deep reveal of the main entrance and the axis of three-wing windows is disrupted by the graded top floor with a roof garden (no longer tended, unfortunately), which amazed even Le Corbusier himself, who visited Brno on his tour of lectures organized by the Architects' Club in 1925. The use of the ferro-concrete skeleton enabled significant layout variability. The ground floor housed a monumental hall with counters faced with marble; the basement was occupied by an archive and safes. The individual floors were occupied by differently sized offices for the bank staff. The complicated operation was vertically serviced by an elevator and several staircases, the most prominent of which, round and with gracefully curved railings, is situated on the right of the entrance lobby. Light was brought in by a skylight leading as far down as the second floor. The building has been the seat of Czech Radio Brno since 1950, and this organization made major modifications in the interior to accommodate its needs. The entrance lobbies received low soffits and the original hall with counters and ferro-concrete pillars was divided into individual recording studios.