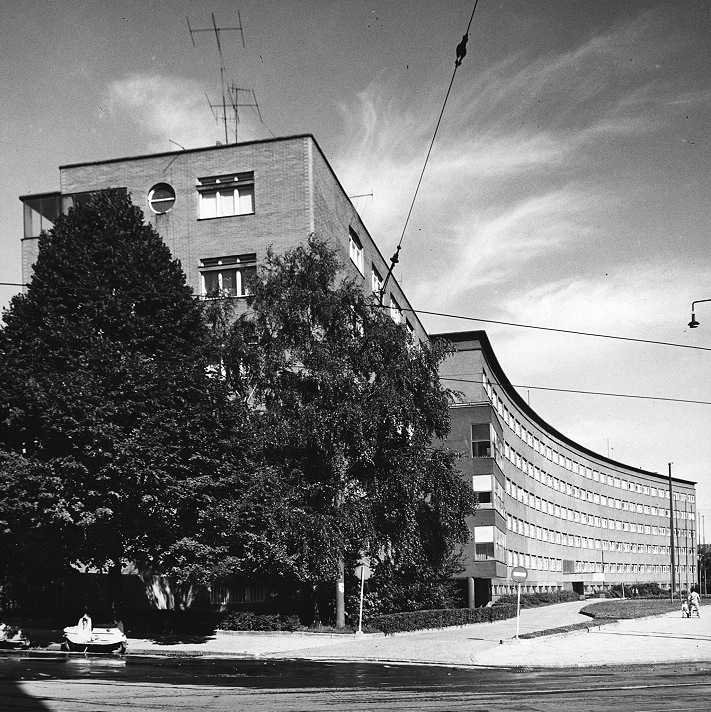 After the formation of independent Czechoslovakia, it was essential that the army be reorganized; therefore, the Regional Military Headquarters for Moravia and Silesia commenced operations in Brno in November 1918. In 1936, the fast deteriorating security situation in Europe and the Nazi threat accelerated the decision to establish the new 3rd Army Command reporting to the Regional Military Headquarters. The new headquarters were located in a new building designed by Bohuslav Fuchs and erected in Kounicova Street in 1936-37. Bohuslav Fuchs had cooperated with Jindřich Kumpošt on a study for Akademické náměstí, which was to grow on adjoining plots, as early as 1931; however, the project was never implemented. And yet, Fuchs had not fully abandoned his original urbanistic idea. The curved shape of the stand-alone six-level Regional Military Headquarters evokes the square that would have been demarcated by the symmetric layout of the Regional Court on the other side. The segmented form adds a dynamic and emotional element to the otherwise purist facade with an austere grid of windows. The rear facade is segmented by four bulky risalits.The building was the headquarters of the German Wehrmacht during World War II. After the liberation the building housed the Czechoslovak army again until 1950, when it was transferred to the newly founded Military Academy of Technology. The military educational system was reorganized in 2004, when the University of Defence was established; the chancellor's office, the command office and the deans' offices of several faculties are now based in this building.