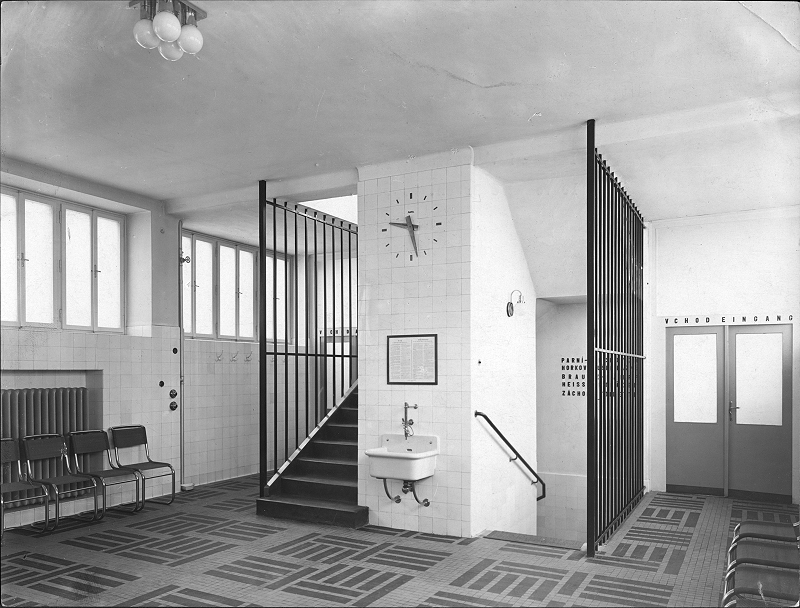 New scientific discoveries at the turn of 20th century produced stricter sanitary requirements, which in turn led to a closer focus on the unacceptable living standards of the working class. This emphasis on hygiene brought about large-scale demolitions of historic buildings and the emergence of new, more generous urban designs. Vodní Street in the southern part of Brno, through which the Svratka millrace had flowed as far back as the Middle Ages and where the town's water distribution system pump had been set up near Lampl Mill in the early 15th century, also acquired a new look. After a new water distribution network was built in the early 20th century, a decision was made to convert the pump into a public spa with 32 hot water and 6 cold water showers.
This older building was converted by architect Bohuslav Fuchs into a tub spa in 1927-28. The architect designed a plain block-shaped building crowned by the Le Corbusier-like framework of the open roof terrace. The layout consists of a row of three rooms: the lounge, waiting room and the spa itself. The facade reveals this functional division in the shapes of the windows: the entrance part features grid windows while the spa has ribbon windows.
The wide staircase facing Nádražní Street led visitors to the lounge with the ticket office in the middle and a snack bar and barber's shop on the sides. Having paid the relatively low admission fee, the visitors went to the spacious waiting room and then to the spa with twenty separate cells with bathtubs and accessories, separated from the central corridor by a partially glazed wall. Bathers could also ascend to the sunbathing terrace on the flat roof. The building is still used as a hydrotherapy spa, though new requirements for equipment have resulted in changes to the interior.