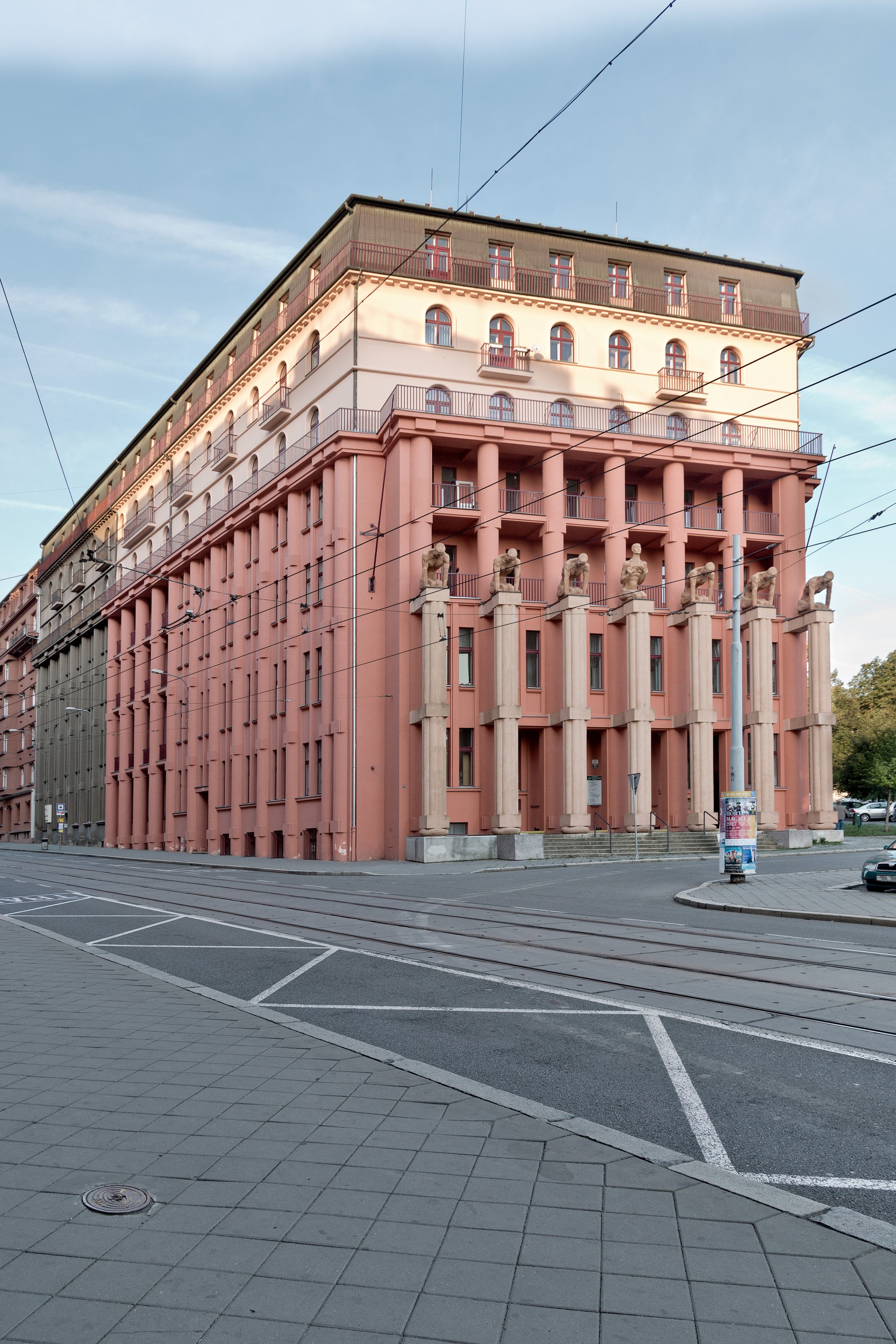 The management of the District Sickness Fund decided to build new headquarters in the early 1920s. After the fund merged with the General Worker and Support Fund, the number of its clients soared and its premises in Francouzská Street were no longer sufficient. The investors addressed architect Jindřich Kumpošt, who prepared a project for a building on the corner of Zahradníkova and Nerudova streets in 1922. The District Sickness Fund decided to use the state subsidy under the Building Act, which was only provided on the condition that the project involved apartments occupying two-thirds of the structure. Therefore, the offices and consulting rooms were only situated on the raised ground floor and the first floor; the remaining area housed 56 apartments.
The A-shaped ground plan copies the corner of Nerudova and Zahradníkova streets. The monumental building conceals two courtyards separated by a one-storey connection wing housing laboratories and a conference room. Kumpošt employed a progressive structural design consisting of ferro-concrete pillars, which enabled him to thin the walls from 100 down to 45 cm and to accelerate construction time to only one year. The structural system also influenced the facade, which consists of interrupted rectangular shaped columns reaching up to the third floor. The fourth floor features a running balcony also repeated on the topmost floor originally covered with clay tiles as a mansard roof.
The main entrance situated in the front corner was enhanced with protruding columns bearing sculptures of kneeling figures by Václav Mach symbolizing the social welfare mission of the sickness funds. The prominent vertical segmentation and relief elements on the facade refer to the influences of German architectural expressionism as well as Czech national rondo-cubism. However, this design stems from the structural system employed and is not mere decoration. The expressive appearance resulted not only from Mach's sculptures, but also from the red paint used on the facade. Its use was inspired by period discussions and the defence of colourful facades representing opposition to the dull grey Austro-Hungarian buildings.
The building boasted the most modern furnishings in Czechoslovakia at the time. In addition to central heating, the building boasted a pneumatic mail system for fast communication between individual wards, cutting-edge medical equipment in surgeries, four electric elevators and an automated phone exchange connecting 75 end stations.
In 1928, the outpatient medical care centre (Zahradníkova 2) designed by Kumpošt with outpatient clinics and a surgery department was added to the District Sickness Fund. Both buildings were transferred under the administration of the Municipal Authority for National Health in Brno in the 1950s, when the era of gradual irreversible interior modifications began. At present, the buildings belong to the City of Brno and serve solely as healthcare facilities. All of the 56 apartments have been converted into surgeries or waiting rooms, degrading the original sophisticated layout, which has been turned into a maze of dark corridors and confined rooms giving the impression of a temporary facility.